The United States has again surpassed Saudi Arabia as the world’s largest holder of recoverable oil, according to research and data expert Rystad Energy. The US has added close to 50 billion bbls over the last year and now holds an estimated 310 billion bbls of recoverable oil with current technologies, equal to 79 years of US oil production at present output levels. 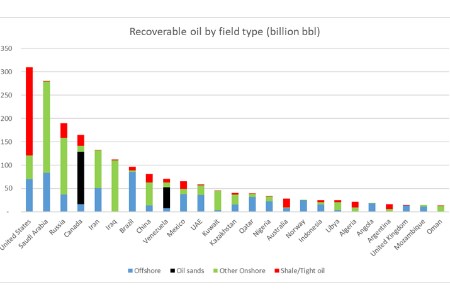 This vast increase of estimated recoverable oil in the US over the past year relates largely to a doubling of hydraulic fracturing operations in the Permian basin, where Rystad Energy also sees more reserves per well drilled, and to new areas and formations that have been geologically proved. Texas alone now holds more than 100 billion bbls of recoverable oil, 90% of which is from shale or other tight formations, ie. from wells that require hydraulic fracking to produce commercial quantities of oil.

The above numbers for “recoverable oil” include expected production from future discoveries as deemed likely by Rystad Energy. Out of 1 trillion bbls of yet undiscovered oil globally, shale oil makes up close to 300 billion bbls, according to Rystad Energy’s database. Some 78% of these yet-to-find oil resources lie within non-OPEC countries.

The Petroleum Resource Management System (PRMS) from the Society of Petroleum Engineers provides a widely accepted scheme for classifying petroleum reserves and resources. However, the term proved reserves is used very differently around the world. When countries officially report proved oil reserves, some governments refer to the industry’s strict definition of commercially proved reserves, while other governments use definitions that are more in line with how geologists would apply the term, ie. proved by exploration activities rather than by development activities. BP’s Statistical Review of World Energy 2018, a widely recognised source of oil and gas facts, was published today with the official reports of proved oil reserves from governments around the world.

In the table below, Rystad Energy shows how consistent, bottom-up data compares with these officially reported numbers. For some OPEC countries, like Venezuela and Libya, the official numbers are several times higher than the estimates from Rystad Energy. “Compilations of government reported oil reserves are a mix of apples and oranges, and the standards differ largely between OECD and OPEC countries,” says Per Magnus Nysveen, Head of Analysis at Rystad Energy.

Read the article online at: https://www.oilfieldtechnology.com/drilling-and-production/19062018/rystad-energy-the-united-states-again-holds-more-recoverable-oil-than-saudi-arabia/

The agreement will provide FutureOn’s FieldTwin Design software for use on strategic field development projects across the Norwegian oil and gas sector on an ongoing basis.