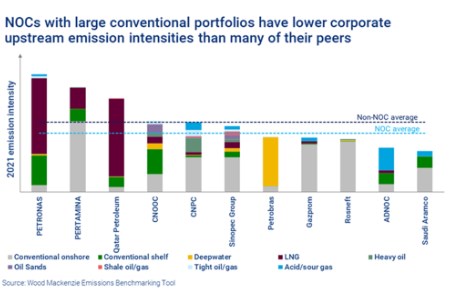 NOCs dominate the global oil and gas space – producing 50% of liquids and 48% of gas in 2021. And as some IOCs diversify away from oil and gas as part of their energy transition strategies, this is only likely to increase.

But high levels of production result in high absolute greenhouse gas emissions from upstream activities. Of the almost 100 companies included in our Emissions Benchmarking Tool, NOCs account for nearly half of the top 20 upstream emitters (scope 1 and 2) in 2021, and take the top two spots.

NOCs must play a role in the global mission to decarbonise – could 2021 be a game-changing year?

For many NOCs, the primary role is to generate revenue and maximise resource extraction for oil- and gas-rich government shareholders – and they often have access to some of the best quality and lowest cost resources. NOCs are cash engines for oil dependent economies, generating an average of US$8.20 of free cashflow for every barrel of oil equivalent (boe) in 2021, compared to a non-NOC average of US$6.60/boe. And some governments are reliant on oil revenues for over 90% of government income. So, efforts to reduce emissions, or carbon taxing, are a significant threat.

However not all NOCs are equal, and those with large, long-life conventional portfolios, such as Saudi Aramco and Rosneft, have lower corporate upstream emission intensities than many of their peers. Companies heavily weighted to LNG, on the other hand, have a high scope 1 and 2 emission intensity.

The trend for carbon policy (such as carbon taxes) and emissions reduction targets is growing. But the risk to many NOCs is low, at least for domestic operations, with most governments unlikely to inflict carbon policy that will have an impact on domestic hydrocarbon revenues.

However, on the back of the Paris Agreement, there is growing global pressure for all countries to set emission reduction targets and policy, and those policy mechanisms may affect imported products as well as domestically produced products. The Carbon Border Adjustment Mechanism proposed under the EU Green New Deal is one such mechanism. There is also mounting pressure from investors for companies to reduce operational emissions.

High production and absolute emissions expose NOCs to more absolute value at risk if carbon taxes are implemented. We calculate over US$40 billon of value would be at risk for each of the top two NOC emitters if a US$40/tonne carbon tax was applied on scope 1 and 2 upstream emissions (ignoring possible tax effects if carbon pricing was applied on a pre-tax basis). Generally lower emissions intensity and high free cashflow means many NOCs could tolerate extremely high carbon taxes. Of the 11 NOCs analysed, the average carbon tax for upstream company cashflows to break even at a 10% discount rate is over US$400/tonne.

The NOCs are behind the curve when it comes to emissions reduction targets, with only three having set net zero ambitions: PetroChina, PETRONAS and Sinopec. Many have less ambitious, short-term targets and a handful, including Saudi Aramco and Gazprom, are yet to set any corporate targets. Several NOCs have ambitious production growth targets which will make any absolute emissions reductions challenging.

Last year saw a shift in focus for the European Majors, with all announcing targets to strive for ambitious Scope 1 and 2 emissions reduction targets and carbon neutrality by 2050.

So, are NOCs next? There are several drivers for such a change. Financial risk due to carbon pricing is not the primary one, but increasing stakeholder and investor pressure, the growing marketability of low-carbon products and the physical impacts of climate change are all motivating forces.

And emissions reduction could evolve into lucrative business opportunities, with many of the NOCs already well placed to take advantage. So-called “green LNG”, carbon capture utilisation and storage, as well as more low-hanging fruit like reducing flaring and fugitive emissions are all under active consideration by several NOCs.

We think 2021 could be a pivotal year, with COP26 in Glasgow in November tipping the balance towards the adoption of further emissions reductions targets. Setting a net zero target may not be achievable or desirable for all NOCs, but those with first mover advantage may reap the rewards of sustainability.

Government decision-makers have a difficult task in balancing NOC cashflows to fund day-to-day spending, maximising extraction of resources in a world moving away from hydrocarbons while also juggling the risks associated with climate change.

Read the article online at: https://www.oilfieldtechnology.com/special-reports/30042021/the-role-of-nocs-on-the-road-to-net-zero/