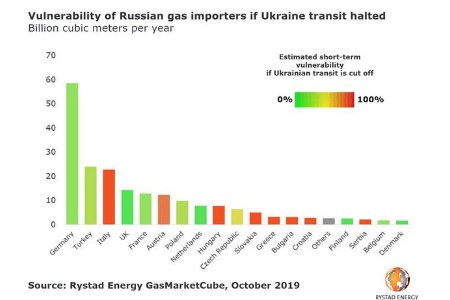 Russia’s Gazprom and Ukraine’s Naftogaz have until 1 January 2020 to come up with an agreement to ensure the continued transport of at least 80 billion m3 of Russian natural gas to Europe in 2020 – or about 30% of European imports. For Ukraine, on the other hand, around US$3 billion in annual transit revenues are on the table. The country claims to have enough natural gas in storage to last through the winter.

“A supply disruption would not benefit anyone. If Russian exports were to drop, this would only open the door for more US LNG into the European market, representing a loss in market share for Gazprom. European customers’ gas bills would go up, and gas’ reputation as a reliable source of energy would be tarnished,” says Carlos Torres-Diaz, head of gas markets research at Rystad Energy.

“If no deal is reached and a supply disruption occurs bullish gas traders would be receiving a much-awaited Orthodox Christmas treat. Even though Europe has been stocking up on natural gas ahead of winter, we still see an upside risk of winter spot prices spiking above US$7 per MMBtu, which would then usher in LNG cargoes to help meet marginal demand," Torres-Diaz added.

The main sticking points in the negotiations include the duration of a new contract, annual transit volumes, and rates. Rystad Energy’s current base-case scenario is that the parties come to a solution and that Russian gas – in some capacity – continues to flow through Ukraine at least on a short-term basis.

While a deal is economically the best option for both parties, it is possible that any of the three following scenarios could play out:

A new long-term contract: The Ukrainian side wants to secure a long-term 10-year contract for 60 billion m3  with the possibility of pumping another 30 billion m3 . Besides the US$3 billion in transit fees needed to keep the economy afloat, keeping the gas flowing through the transit system is crucial to maintaining the operational integrity of the ageing infrastructure.

A short-term fix: Russia, on the other hand, is pushing for short-term contract renewal to tide over exports until Nord Stream 2 and Turk Stream are fully operational, and transit through Ukraine is no longer needed. This option will be possible if Ukraine harmonises its legislation with EU standards. However, given the short timeline, it is unlikely that Ukraine will be able to carry out all the necessary procedures to unbundle Naftogaz and create a new independent gas transmission systems operator.

Diverting flows: Another temporary solution to sustain Russian supplies to Europe would be to connect TurkStream to the Southern Gas Corridor (SGC), which is nearing construction completion. However, this solution depends on a yet to be completed pipeline with very limited capacity which will end in a region with no need for large gas volumes and bad connectivity to the rest of Europe.

“Russia’s current lack of choices for alternative routes to Europe as well as the threat of irreparable damage to the Ukrainian economy makes us believe that a solution to the never-ending Ukraine-Russia gas war may finally get an answer – whether that is favourable to Russia, Ukraine, or Europe – remains to be seen,” Torres-Diaz remarked.

Read the article online at: https://www.oilfieldtechnology.com/special-reports/29102019/much-at-stake-as-russia-and-ukraine-meet-in-brussels-says-rystad-energy/