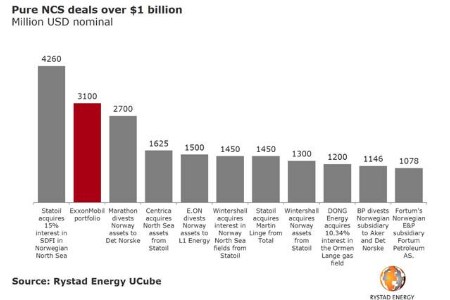 “The valuation implies that a combined divestment of the entire portfolio would put the transaction at the very top of pure Norwegian transactions since the SDFI spin off in 2001,” Sjøthun said, with reference to the divestment of 15% of the State’s Direct Financial Interest (SDFI) in Norwegian offshore licenses when then Statoil was partially privatised 18 years ago.

As of 1 January 2019, ExxonMobil controlled 530 million boe on the NCS. The company’s most valuable asset is its stake in the Snorre field, worth almost US$700 million.

“The profile is mature and declining, but nevertheless sizeable in terms of current production. A portfolio generating high cash flow and with limited tax balances, given the Norwegian fiscal regime with 90% nominal tax relief on investment, will be highly attractive for any E&P company without sufficient revenue,” Sjøthun remarked.

“The portfolio now up for review consists strictly of non-operated assets. The potential exit will follow the trend of American companies refocusing their efforts away from North West Europe,” Sjøthun added.

Read the article online at: https://www.oilfieldtechnology.com/special-reports/27062019/rystad-energy-exxonmobils-norway-exit-could-break-records/