The 85 upstream projects up for Final Investment Decisions (FIDs) in 2019 include 75 greenfield developments, with approximately 42 billion boe of resources and 10 expansion phases, according to GlobalData. 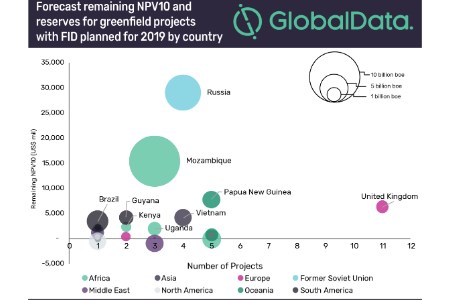 The company’s latest research reveals that natural gas projects contain 70% of the resources from greenfield developments awaiting approval in 2019, with Exxon Mobil leading the project count and forecast investment. As the oil price continued to recover in 2018, there was a significant uptick in FIDs sanctioned. Despite the oil price dip in the fourth quarter, many companies pressed ahead with major FIDs. Cost cutting and higher cash reserves from reduced investment over the past few years has led to the increase in FIDs and more optimistic outlook in the industry despite the volatile oil price.

Jonathan Markham, Senior Oil and Gas Analyst at GlobalData, comments: “Russia and Mozambique have the largest projects with scheduled FIDs in 2019, ranked by recoverable resources. These are primarily gas megaprojects intended to supply LNG exports. This trend is reflected in other areas, particularly in the Asia-Pacific region, with major gas developments to feed LNG projects in Australia and Papua New Guinea, and for power demand in Vietnam.”

Certain oil field developments are still viable in the current price environment, but are either on the giant scale (500 million boe+) or rely on nearby infrastructure to reduce the upfront capital expenditure (CAPEX). The major oil projects are located in the Americas, including additional phases at the giant Libra pre-salt oil field in Brazil, the recent Liza discovery in Guyana and new developments that could revitalise Mexico’s upstream sector.

Markham adds: “Securing funding for these key FIDs is expected to be a major challenge given the oil price volatility and environmental concerns. Major integrated companies and government backed organisations are expected to be the primary drivers behind the expenditure on new projects.”

Read the article online at: https://www.oilfieldtechnology.com/special-reports/24012019/globaldata-gas-projects-dominate-planned-upstream-fids-in-2019-as-companies-bet-on-rising-natural-gas-demand/