Oil prices have jumped as the extreme cold weather the US is experiencing is impacting oil production, but refinery outages are limiting the price ascent. 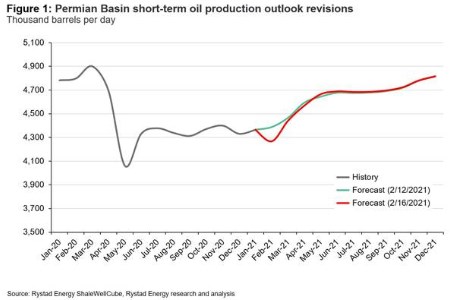 "The oil production disruption that extremely cold weather has caused in the US is moving the whole energy system today and that’s what supports the oil price rise.

The market seems to be reacting bullishly to the news that more Permian production is shut-in from the cold blast in the US than previously thought, and for longer.

However, the net effect on crude supply and refinery demand seems to be modest and close to net zero, justifying the price increase but also capping it.

Given the 3.6 million bpd refinery capacity shut-in, with refineries estimated to have recently run at close to 85% utilisation, the actual peak crude demand loss could be in the 2.7-3.0 million bpd on the US Gulf Coast.

Gasoline prices relative to crude, the so-called gasoline crack, also continue trading higher, which suggests gasoline demand is not as severely affected from the extreme cold as the 3.6 million bpd refinery capacity.

The situation is still foggy and it will take a few days for the market to realise the actuality of the disruption on crude and products balances.

If temperatures rise slowly, some of the shut production can restart from the weekend, which would allow producers to start resuming flows by the end of the week – if they have power and at affordable prices too.

The disruption in US oil production is the largest on record, about one-third, which could have sent crude prices rocketing higher if refinery demand wasn’t equally bad hit.

In comparison, the largest ever global outage in production happened in September 2019 following the drone attack on the Abqaiq processing facility and Khurais oilfield in Saudi Arabia, knocking 5.7 million bpd off the grid for a several days."

"The Permian Basin, the main engine driving the nation’s oil output growth, is experiencing one of the worst cold spells in over 50 years. This level of frigid weather conditions will be the first of such significance for the unconventional oil and gas industry in the area.

Currently it appears that ultimately the supply disruption in February, and a prolonged impact in March-April, might be even stronger as certain operational challenges experienced through the weekend, have still persisted, if not worsened, through the first few days of the week.

Some parts of the basin have been completely without power since last Friday. But in general, it seems that operators are facing intermittent blackouts in different areas.

Power outages result in temporary shut-ins of already producing wells, along with disrupting some infrastructure facilities such as regional gas processing plants.

Gas flows on interstate pipelines carrying Permian gas declined by only 10% in this cold period, but feed gas into Gulf Coast LNG projects averaged 25% below the level where it was in January.

TX LNG projects (Freeport and Corpus) were hit particularly hard, while Cameron and Sabine remained more resilient. All this points to material associated gas production loss from the Permian (and to a lesser extent from Eagle Ford).

Some E&Ps started reporting 4Q20 results and commenting on temporary production loss due to curtailments in this extreme weather period.

While most curtailments are expected to be restored quickly in the next couple of weeks, it is likely that single-day oil production curtailment impact peaked at nearly 3.5 million bpd in the last few days.

Average curtailment impact in the last seven days was likely closer to 2 million bpd as many wells were going through intermittent shut-ins due to the power loss of temporary gas processing plant outages.

Public E&Ps have not provided any emergency operational updates yet – like they have in the past with similar weather-related disruptions caused by tropical storms or hurricanes, for example.

Hence, overall expectations are that the production shut-ins will be restored very quickly once the weather system clears. Even so, the impact will be quite material even on average daily production figures for the month of February.

As such, we have revised our full oil production forecast for the month down by 250,000 bpd for now, but the number could grow as the cold persists and official reports of more production loss emerge. It is, therefore, expected that Permian oil output will average below 4.3 million bpd this month, the lowest level since May 2020.

The shut-in thesis is further supported by the reduced gas flows we have seen over the last two days on select interstate pipelines carrying gas out of the region.

We are also looking at satellite data for combustion sources in the Permian Basin. We have not documented any uptick in gas flaring in the basin yet resulting from possible gas processing plant outages.

It seems that producers are staying committed to their new ESG-centric business models and have shut-in wells rather than opting to flare the gas because of major midstream outages.

Our service industry contacts continue to report massive delays for planned drilling, completion and flowback operations. This will likely result in an additional supply impact from March.

It is expected that ongoing operational delays will result in a decline of 15% in wells put on production (POPs) next month compared to earlier expectations.

Nevertheless, this also implies stronger supply in April-May once the accumulated backlog of wells is turned online. Compared to their earlier communication from the last week, all our industry contacts now agree that we are dealing with an unprecedented event in the history of the basin.

Yet, all operational challenges resulting from the ongoing cold spell are still expected to be resolved quickly as soon as normal weather conditions return."

Read the article online at: https://www.oilfieldtechnology.com/special-reports/17022021/oil-prices-jump-on-us-production-shut-ins-but-refinery-outages-provide-pillow/