CUI – a hidden threat to surfaces

Corrosion under insulation (CUI) is one of the biggest day-to-day problems facing the petrochemical industry today.

A refinery’s steel piping, storage tanks, vessels and other process equipment are subject to temperature fluctuations. Thermal insulation applied to the pipe or vessel mitigates the effects, but the presence of seams, gaps or other discontinuities in the insulation cladding makes them susceptible to infiltration by outside moisture in the form of liquid or vapour1.

The result of infiltration is moisture on the coated pipe or vessel surface or within the insulation itself, which may be made of calcium silicate, expanded perlite, man-made mineral fibres, cellular glass, organic foams, or ceramic fibre.

The insulation and cladding hides the protective coating system, though, so even with observation ports, less than 1 % of the surface is visible – and those areas are not likely to be representative of the whole unit.

Typically, removal of insulation is done only on a 15 - 20 yr cycle. With no intervention, over time the coating system that was intended to guard against corrosion can prematurely fail. Maintenance personnel who remove insulation to complete a minor repair job are likely to find a significant degree of corrosion. 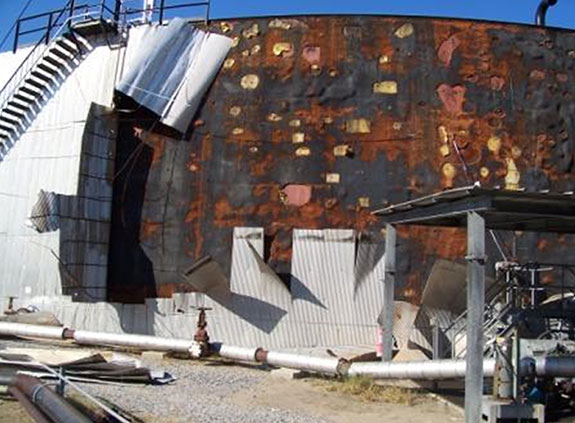 Until the 1970s, little if any thermal insulation was applied to heated carbon steel equipment and vessels in use in hydrocarbon processing below 150°C (300°F).

However, when the cost of energy increased, the problem of CUI as a pervasive issue was set in motion. It suddenly became more cost-effective to apply thermal insulation even at much lower operating temperatures.

Together these developments dramatically increased the amount of insulation used in the industry and set the stage for CUI.

Next to the equipment surface, the insulation forms an annular space or crevice that retains the water and other corrosive media. Sources of water include rainfall, cooling tower drift, steam discharge, wash downs and, because insulation is not vapour-tight, condensation.

The water may or may not contain additional contaminants; for example, rainwater may become acid rain. Further, chlorides and sulphates that may be native to the insulation can leach into moisture to form acids.

NACE, the worldwide corrosion authority, set out its revised standard, NACE Standard SP0198-2010, ‘The Control of Corrosion Under Thermal Insulation and Fireproofing Materials – A Systems Approach’, in 2010.

The industry agrees there are two opportunities for improvement: 1) identifying and correcting problems that may be present on existing pipes and vessels insulated in the past when requirements were different; and 2) properly specifying protective coatings for new construction projects.

Though efforts to keep water out of insulated systems can be made using different design materials and configurations of the equipment to be insulated, CUI is not usually kept at bay on the strength of those measures alone.

Industry guidance, provided by again by NACE, says that immersion-grade protective coatings are the best defense against CUI in both insulated CS and austenitic and duplex SS.

Coating systems incorporated into the standard have a track record of success and include thin-film, liquid-applied coatings; fusion-bonded coatings; metalising or thermal spray coatings; and wax-tape coatings.

Modern facilities are running at temperatures as high as 205°C (400°F), where 150°C (300°F) was more standard previously. Although most equipment does not run at the high end of the temperature design, spikes can occur for various reasons and must be taken into account when specifying the appropriate coating system.

The first generation of IMM coating materials provided an improved solution for CUI but a few limitations were spotted. Prolonged dry time to handle and poor sprayability (overspray) have been the main drawbacks in terms of application features. Poor mechanical resistance (softness, poor flexibility, poor impact resistance) is the other key drawback, making shop-painted steel prone to damage during transportation from shop and at erection on site.

After 80 cycles of the boiling water test, second generation IMM material passed the test with better results compared with Generation 1.

A boost in performance could also be identified when the new second generation IMM product was tested against the same two example materials, using the CUI simulation testing protocol. An uncoated carbon steel panel was also tested as a control to demonstrate the corrosivity of the test environment. Figure 3 presents the panels after exposure under both alkaline and acidic conditions. 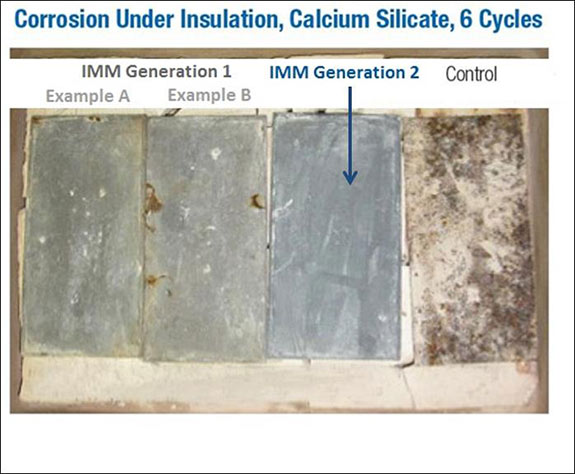 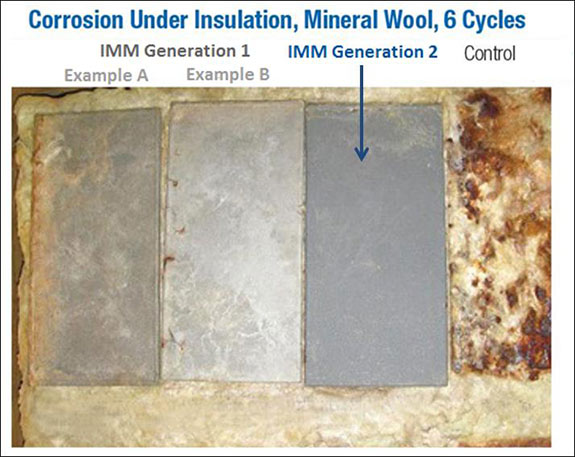 In most petrochemical facilities tanks, piping and valves in hot service are insulated by preparing and priming the steel, wrapping them with insulation materials such as mineral wool or calcium silicate, and then cladding them with light metal jackets to protect insulation from elements and minimise moisture intrusion.

Such sprayable insulative coatings (SIC) provide personnel burn protection, thermal insulation for energy conservation and protection from radiant solar heating.Sherwin-Williams has worked to develop its own solution, Heatflex 3500, a multipurpose insulative acrylic coating engineered to optimise thermal properties.Heatflex 3500 enables dangerously hot systems like piping and ductwork to stay cool to the touch, preventing burns and protecting the safety of personnel. It can be applied directly to ambient or hot surfaces offering facility operators the chance to reduce downtime by keeping systems online during coating.Such coatings are suitable for any industry where conventional insulation and cladding are required. To date, this type of technology does not cover for the full range of operative temperatures and insulation needs, as the cladding approach does. But it is already able to replace cladding systems in a number of scenarios, as a valid option for providing insulation while effectively removing the source of the CUI phenomena.

The table below provides a generic snapshot of this technology and lists the range of utilisation scenarios that SIC can cover today, at current stage of development of the technology, using waterborne acrylic resins with ceramic microspheres.

Formulated from waterborne acrylic resins with ceramic and glass microspheres that minimise energy transfer through the film due to its high air content, these coatings adhere to the underlying primer and prevent water or moist air from corroding the steel.

The air content is so high in these coatings that the specific weight of the liquid paint typically ranging from 0.6 to 0.7 Kg/L, with an important fraction of that weight evaporating out during the drying process.

Because there is no cladding involved in the system, spray-applied insulative coatings can be monitored for corrosion and maintained like any other external coating system. Thermal insulative values will remain constant and predictable.

This means that assets insulated with this modern system can be removed from the expensive CUI monitoring protocol. Thermal insulative coatings can be spray applied over primers that are either zinc-rich (organic or inorganic) or inert multipolymeric matrix materials (IMM, as described above).

Either of these primer technologies can perform well depending on expected temperature, surface preparation and the application technique available. They are also less labour intensive and safer to apply than conventional cladding insulation. To achieve the desired thermal properties, the coatings are applied in multiple fast-drying coats, and then finished with a chemical and moisture-resistant acrylic topcoat for long-term performance.

Unlike conventional insulation, this system will repel water and moisture vapour and maintain its original insulating properties in any weather condition. With an unlimited recoat window, maintenance personnel can handle periodic repair and touch-up, and the system can be washed to remove dirt, mildew and other surface contaminants.

CUI has been a hiding menace. Recent technologies are now providing better ways to diagnose, treat and prevent CUI.

1. The first direction is the use of NACE SP-0198 as a tool to understand and correctly diagnose the sources of CUI and the best solutions to cope with it.

2. The second direction is to carefully select the appropriate protective coating system for CUI protection under conventional cladding insulation up to 650°C service taking in to consideration the following criteria:

Avoid the use of zinc rich primers or at least overcoat it with materials that properly handle the cyclic high temperature immersion service experienced under conventional insulation.

1.Finally, the third direction, when possible, is to replace conventional cladding insulation by sprayable insulative coatings (SIC). In this case the insulative layer is well adhered to substrate or primer, presenting a monolithic barrier that is always dry, keeping a constant insulative value and eliminating the sources of CUI. Given the available technology, for this option the adoption of formulations based on water borne acrylic resins with ceramic microspheres is recommended, top coated with UV resistant finish coat to provide service life from 10 to 20 years.

The coatings industry is now looking at future improvements of materials to cope with insulation & CUI prevention needs, with two directions:

2.Improving the performance of protective coatings against CUI by delivering an IMM-level of performance with enhanced mechanical resistance, to further minimise transportation and erection damages.

Edited from an article by Joao Azevedo

Read the article online at: https://www.oilfieldtechnology.com/special-reports/15062016/corrosion-under-insulation-how-coatings-technology-is-tackling-a-costly-industry-problem/