“Be it known that I, Benjamin K. Stroud, a citizen of the United States… have invented the new and useful Improvement in Application of Mud Laden Fluids to Oil or Gas Wells, of which the following is a specification.” So began the introductory paragraph to US patent application 1 575 945, signed by the inventor on 18 November 1924, which launched the use of finely-ground minerals such as barite as the preferred weighting agents for drilling muds. While Benjamin Stroud’s powdered minerals have been of great service to the oil industry over the past 90 years, their legacy has been a host of well construction and production problems. These long-standing problems include reduced drilling rates, well control difficulties, wellbore instability, stuck pipe and formation damage. The industry continues to develop a whole raft of special procedures and technologies for managing or mitigating the problems created by drilling fluids weighted with powdered solids. For example, a search of the SPE publications database indicates the existence of 370 papers on the subject of managing barite sag, including 39 papers published in the last year. The latter figure suggests that, despite 90 years of trying to remedy the problem, the issue of micronised weighting solids sagging in drilling fluids is still a subject of some concern for the drilling community. 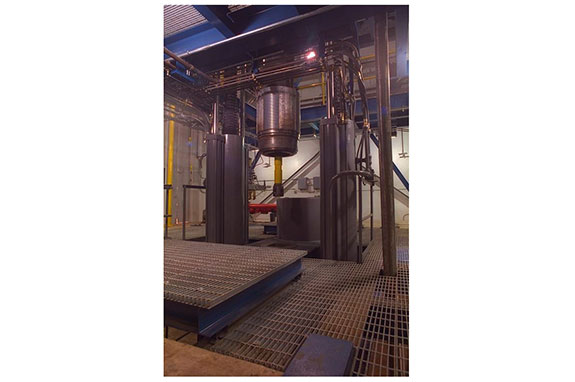 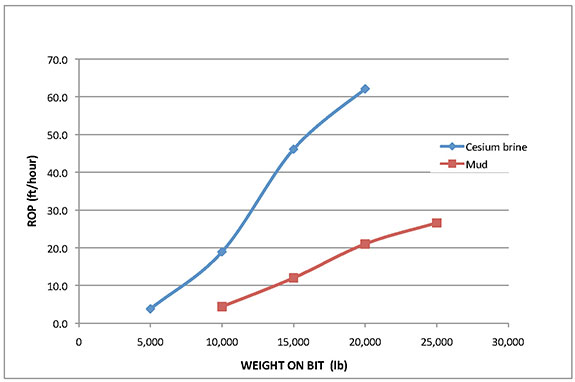 These remarkable drilling results opened the way for the introduction of the formate brines,3-5 which were more suited to drilling operations than heavy halide brines and became commercially available in 1990s.

The results of extensive use of formate brines as drilling fluids over the past 20 years show that they have effectively resolved most of the problems caused by solid weighting agents and opened up a new era of improved drilling performance.6-14 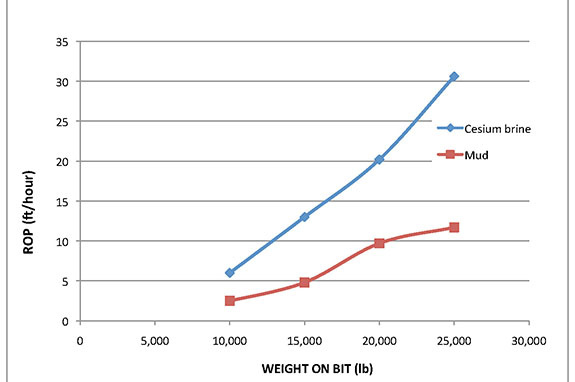 Just as with the clear high-density halide brines, the formate brines generate much higher drilling rates of penetration than water-based and oil-based muds of the same density in Terratek’s full-scale wellbore simulator.15-17 In 1996 Ramsey et al.15 showed that a standard J-33 roller cone bit could drill shale and sandstone 3 - 4 times faster in a solids-free 18.7 ppg caesium formate brine than in a 18.3 ppg water-based mud (Figures 2 and 3). The absence of bit-balling while drilling shales with the caesium formate brines was a notable finding from these tests. The ROP versus torque and hydraulic horsepower data suggested that the formate brine would give a longer bit life and extended mud motor life. 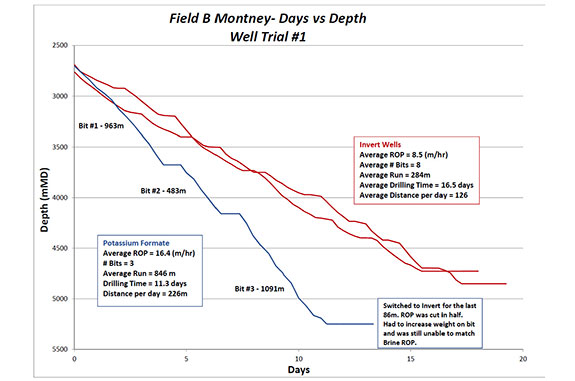 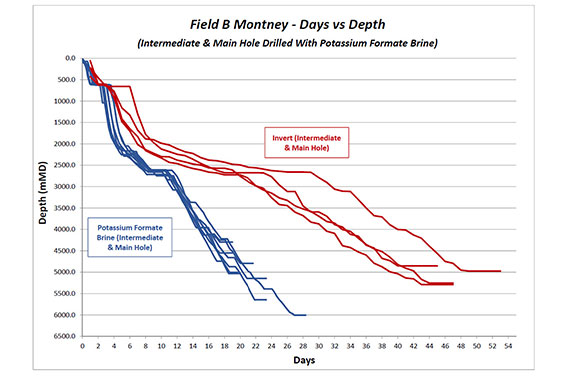 Very recently van Oort et al have conducted more full scale drilling tests with formate brines in a high pressured drilling simulator, shown in Figure 1.17 Cylindrical rock samples were drilled with a 8 ¾ in. PDC bit at the bottom hole pressure of 6000 psi. Their tests confirmed ROP enhancement in Mancos Shale with formate brines, which they linked to the anti-accretion activity of these fluids. They proposed that the anti-accretion activity was a result of osmotic dehydration of the clay fabric to provide better lubrication and cleaning on the cutter faces, possibly combined with strengthening of the outer layers of the shale making it less prone to sticking.

Quite a bit better

Since June 2013, solids-free potassium formate brine has been used to drill over 140 long lateral wells in the Montney Shale formation and other unconventional shale fields in Western Canada for operators such as Paramount Resources, EnCana, Shell Canada and Progress Energy.17

It is reported by van Oort et al that Montney shale laterals were originally drilled with OBM and suffered from slow ROP and multiple (average = 8) bit runs were required to reach TD. On changing over to solids-free potassium formate brine as the drilling fluid the average ROP typically doubled to 16 m/hr and only 2 or 3 bit runs were required to reach TD (e.g. Figure 4) – validating Ramsey’s 1996 prediction of extended bit life in formate brine. 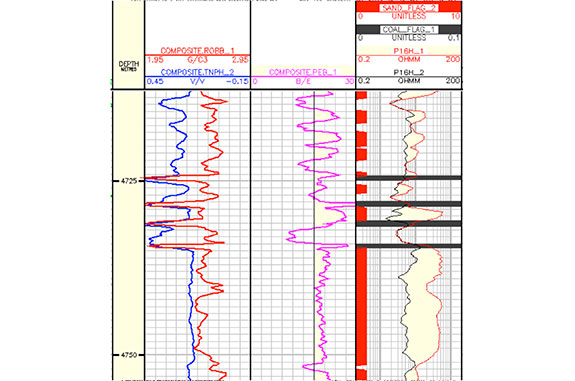 Logging with a difference

The improvement in drilling efficiency from changing to formate drilling fluids has not been without some interesting side effects. Perhaps the most notable of these is the impact of formate brines on logging tool response and logging data interpretation.11,19-26 The formate brines differ significantly from conventional drilling fluids by exhibiting the following petrophysical properties:

Each of these properties has an influence on the response of one of more of the numerous logging tools deployed downhole in LWD and MWD assemblies, requiring corrections for their effects in the borehole and within the invasion zone in the formation. Without these corrections traditional petrophysical models could give pessimistic porosity and permeability estimates and inaccurate mineralogy determinations. The more recent papers published on the characterisation of nuclear logging tool responses for formate drilling fluids seem to agree that only minor corrections are needed for the borehole environmental effects.23,24 The logging companies also appear to have corrections available for LWD responses obtained in gas-bearing sandstone formations invaded by formate brines – calibrated by using Pe measurements in caesium formate brines, and long-space density measurements in other formate brines, to estimate the depth of filtrate invasion.11,22,23 The logged Pe provided by the invasion of caesium formate filtrate is extremely useful for correcting the density curve for mud/borehole effects and mud filtrate invasion, and for estimating the saturation of the filtrate.11 It is also ideal for defining permeable sands. Combining the photoelectric effect and its high vertical resolution with resistivity measurements from both the drill pass and ream pass of an LWD produces a very reliable and accurate net reservoir definition (Figure 6).11 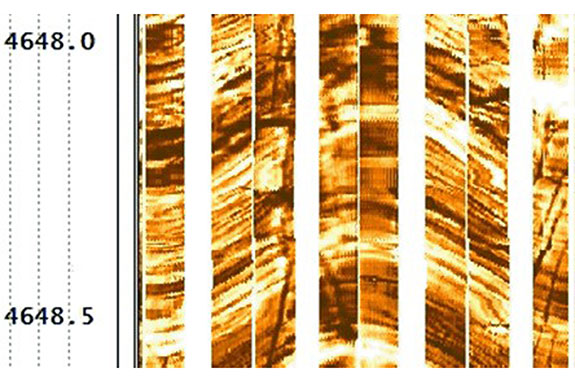 Very recently Saudi Aramco and Schlumberger used time-lapse (i.e. drill and ream/wipe pass) LWD logging measurements to create what they describe as a step change in petrophysical analysis for wells drilled with formate brines.25,26 Their approach has been to consider the different time-lapse LWD measurements as representing different axes in measurement space, and then rotating the axes to reduce the number of rotated measurements affected by formate filtrate invasion to just one. They then discard that particular measurement and use the remaining rotated measurements in their analysis. Using this technique they claim to have built a robust, but remarkably simple petrophysical model with some very interesting characteristics:

It looks like time may be on the side of formate brines as the oil industry moves towards a new and better future in which the only solids found in drilling fluids will be rock cuttings created by the drill bit.

This article also appeared in the April issue of Oilfield Technology.

Read the article online at: https://www.oilfieldtechnology.com/special-reports/14042015/time-for-a-change/