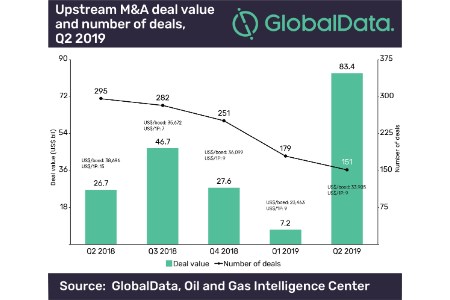 Capital raising, through equity offerings, witnessed a substantial increase in deal value, recording US$13 billion in 2Q19, compared with US$1.5 billion in 1Q19. The number of equity offering deals also increased by 19% from 88 in 1Q19 to 105 deals in 2Q19.

One of the top capital raising deals of 2Q19 was Occidental Petroleum’s agreement to issue 100 000 shares of cumulative perpetual preferred shares, at a price of US$100 000 per share, to raise gross proceeds of US$10 billion. The shares will be subscribed to by Berkshire Hathaway Inc. The preferred stock will accrue dividends at 8% per annum (or with respect to dividends that are accrued and unpaid, 9%).

Occidental Petroleum will also issue warrants to purchase up to 80 million shares of Occidental common stock at an exercise price of US$62.5 per share. The warrant to be issued with the preferred stock may be exercised in whole or in part and from time to time, until one year after the redemption of the preferred stock. The placement is contingent upon Occidental entering and completing its proposed acquisition of Anadarko.

Read the article online at: https://www.oilfieldtechnology.com/special-reports/13092019/upstream-oil-and-gas-ma-and-capital-raising-deals-totalled-us1305-billion-in-2q19-says-globaldata/