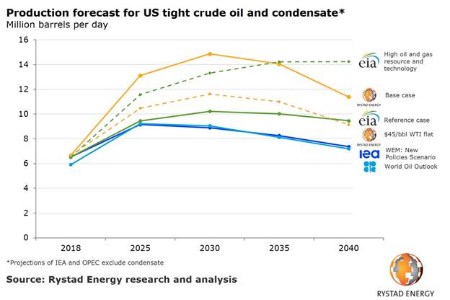 In the past decade, crude oil coming from shale patches such as the Permian in the US has grown from a negligible contributor to an upstream behemoth, reshaping the industry and the oil market.

US Light Tight Oil (LTO) represented less than 1% of global oil supply just nine years ago. Today, US LTO represents close to 10% of total global oil supply, a percentage which is expected to continue its ascent going forward. But by how much? That is the million-dollar question.

Different agencies and knowledge houses have responded to this with varying degrees of positivity and scepticism. Rystad Energy aims to shed some light on this uncertainty and provide its answer.

Assuming a flat US$45/bbl WTI scenario, Rystad Energy estimates that LTO supply would once again peak in 2030, but at a more modest 11.5 million bpd. For the prediction to be as low as other institutions’, the oil price would have to drop sharply.

“Based on our analysis, the oil price would need to be as low as US$42 per barrel WTI going forward for the 2030 US LTO supply to be as low as EIA presents in their Reference case,” Passos remarked.

There is a consensus in the market that the Permian Basin will be the dominant part of 2040 US oil supply. What varies, however, is the view on how large that supply is going to be.

“Our forecast is the most bullish – in Rystad Energy’s base case price scenario we expect Permian’s production to grow to around 7.5 million bpd by 2040,” Passos remarked.

To better depict where the growth in our forecast comes from, Rystad Energy splits the overall production forecast for US LTO by life cycle.

It should be noted that various institutions apply different sets of assumptions representing their best assessment of the market. Rystad Energy’s empiric well-by-well information for every shale acreage in the US allows us to take a bottom-up approach to answering the salient questions of the future.

“The price factor is of course one of the deciding assumptions that defines our forecast for the US LTO supply in the long-term. As reflected by our base-case price scenario, we expect the oil price to increase in the long-term,” Passos remarked.

In addition, strong US supply is driven by a large inventory of wells remaining to be developed across a number of prolific shale plays. Permian Basin in particular is estimated to hold thousands of highly economic locations under the oil price environment prevalent in the future. We also estimate that growing production in the basin will be met by adequate takeaway capacity expansion as a number of additional not yet sanctioned pipeline projects have been proposed.

“However, it should be noted, that any changes in future market conditions would have an immediate impact on our shale production projections,” Passos concluded.

Read the article online at: https://www.oilfieldtechnology.com/special-reports/13092019/rystad-energy-predicts-us-shale-supply-to-peak-around-2030/

The discoveries were proven in 2017 and 2020 respectively and contain a total of 36.3 million bbl of recoverable oil equivalent.