In a new report, Wood Mackenzie analyses the upstream strategies of Japanese E&Ps and weighs up the future options in the face of dramatic industry change.

Japanese E&Ps are a material, but often unheralded, part of the upstream industry, collectively producing around 1.6 million boe/d. 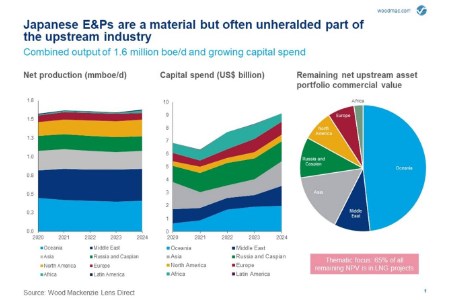 Today, they find themselves at a crossroads, as domestic drivers to develop international resources are weakening and the energy transition has forced a review of upstream strategies.

At the same time, relative to their industry peers, most Japanese E&Ps lack exposure to high-impact exploration and growth themes such as deepwater. Combined with a lack of portfolio renewal since the 2014 downturn through exploration and M&A, many upstream players must look to new investment to maintain growth.

Wood Mackenzie research director Angus Rodger said: “M&A activity by Japanese firms has dropped significantly since the last downturn. Between 2010 and 2014 they spent over US$16 billion acquiring upstream assets. From 2015 to 2019 they spent less than US$5 billion. This lack of activity has in part been due to uncertainties over the impact and speed of the energy transition.

“In the short-term, many portfolios are in reasonably good shape. But longer-term, the growth options are limited. Current market conditions are chaotic due to falling oil prices, uncertain demand and a lack of buyers. But overall, if prices stay at current levels we will see more companies across the global upstream industry look to free up capital through asset sales, and the Japanese E&Ps are well-placed to screen the opportunities that will come to light.”

Wood Mackenzie has identified four broad groups of Japanese E&Ps, each with their own individual upstream strategies and portfolio challenges:

Wood Mackenzie research associate, Zixin Goh, said: “Portfolios need clarity. Bigger players such as INPEX and Mitsui can leverage balance sheets to acquire undervalued upstream assets and diversify their growth themes and options. Small and mid-sized players need to be nimble, leverage their strengths and target specialised capabilities or niches. An example of this is JXTG’s stated focus on acquiring new CO2/EOR opportunities.

“Either way, we see significant structural change ahead as companies are forced to decide whether they want to be involved in the upstream sector or exit.”

Read the article online at: https://www.oilfieldtechnology.com/special-reports/13032020/japans-ep-players-face-structural-change-says-wood-mackenzie/