Skip to main content
Advertisement
The Covid-19 pandemic has caused the largest horizontal rig count collapse ever recorded in the US, a Rystad Energy analysis of Baker Hughes data shows. The total horizontal oil rig count fell below 270 rigs last week, a 57% decline from the peak of 624 rigs seen in the middle of March 2020. Horizontal gas drilling was down to 70 rigs last week, which is 54% below the previous peak seen in June 2019. 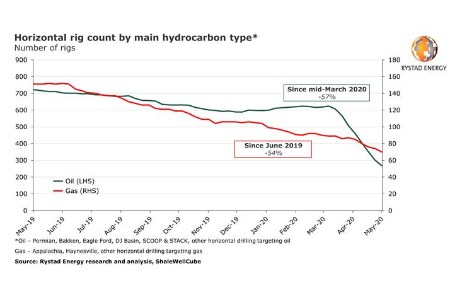 The magnitude of the decline in horizontal oil drilling makes this downturn even more unique, compared to the previous downturn of 2015 – 2016, where declines all the way from the peak to the trough reached around 53% to 54%.

While we have not reached the bottom yet, we have most likely passed the peak pace of decline, both in absolute and percentage terms. After several weeks of observing a decrease of 50 – 55 rigs per week, the oil rig count was down by only 32 rigs last week. On a two-week basis, a 23.4% fall was recorded last week – certainly moderate in comparison to the peak two-week decline level of 25.6% seen the week before.

“The oil price crisis and the impact of Covid-19 has resulted in the most dramatic collapse of the US land rig market in history. There are two key trends around basin mix; the share of Permian increased in terms of total horizontal oil drilling from around 62% to about 73%, while the share of gas in total horizontal drilling increased from 12% to 21%. We anticipate that both of these shares will continue to climb in the next few weeks,” said Artem Abramov, Rystad Energy’s Head of Shale Research.

The number of counties with active horizontal oil drilling across the whole country has kept declining. Last week, North Slope in Alaska, Walker Ridge in Louisiana, and Ellis County in Oklahoma saw the departure of their last active rigs. This brought the total number of active counties in the country from 49 to 46, a record-low level in modern history.

Meanwhile, the number of active counties has stabilised in the state of Texas at 28 counties, and in the Permian Basin at 18 counties.

Total horizontal rig count in the Permian fell below 200 rigs and now exhibits more than 50% decline from the peak in March 2020. The three largest sub-basins, Delaware New Mexico, Delaware Texas and Midland North, are now diverging rapidly from each other in terms of the magnitude of decline. Delaware Texas is rapidly losing its rigs having fallen from the peak of 118 rigs to 44 rigs, due to both structural declines and the reallocation of some rigs to sweet spots in New Mexico.

Midland-focused operators with Delaware exposure have always prioritised activity outside Delaware acreage. Drilling in Delaware New Mexico stabilised last week, although additional declines might still be observed in the next few weeks. The relative resiliency of Delaware New Mexico can be largely explained by the lack of drilling activity declines realised by ExxonMobil and Devon Energy, which together account for around 50% of the active rigs now in the sub-basin.

The Midland North Basin is seeing more significant declines than Delaware New Mexico, though these declines are really driven by the eastern portion of the basin, which hosts Howard and Glasscock counties. Midland County, for example, exhibits only 44% decline from the peak, which is comparable to Lea County in New Mexico.

Outside of the Permian, declines persist in Eagle Ford, Bakken and SCOOP & STACK. The total horizontal rig count in these three basins combined is down to 59 rigs which is around a 66% decline from the peak activity level seen in early 2020. Horizontal drilling has been relatively flat in DJ and PRB basins in recent weeks, following a period of material downward adjustment.

Gas-focused drilling has kept declining gradually, although Haynesville is now exhibiting some signs of stabilization. Total horizontal gas drilling in Appalachia, which includes Marcellus and Utica, is already down to 35 rigs. The rig count could fall below 30 by the end of 2Q20 before stabilising in the second half of the year.

Read the article online at: https://www.oilfieldtechnology.com/special-reports/12052020/rystad-energy-covid-19-causes-largest-ever-horizontal-rig-count-fall-in-us/