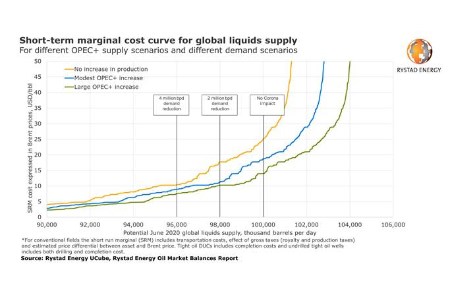 After the breakdown in OPEC+ negotiations and subsequent oil price free-fall, Saudi Arabia and the UAE have both signalled their intention to flood the market with additional oil production starting next month.

“Without OPEC+, the global oil market has lost its regulator and now only market mechanisms can dictate the balance between supply and demand,” said Espen Erlingsen, Rystad Energy’s Head of Upstream Research.

Rystad Energy estimates that global liquids demand was reduced by around 4 million bpd in February, primarily driven by the coronavirus. Over the next months, demand might be weakened by between 2 million to 4 million bpd due to the virus.

The cost of supply curves can be a good barometer to gauge how the market will react to various scenarios, said Erlingsen. Rystad Energy has updated its estimates of the short-run marginal (SRM) cost for the global liquids market.

For conventional fields, the SRM only includes transportation costs, effects of gross taxes and price differentials to Brent. All other costs, such as production cost and investments, are excluded, as Rystad Energy believes that these costs will not affect production levels from producing fields in the short term.

For tight oil assets, producing wells include the same costs as conventional fields, while the drilled uncompleted wells (DUC wells) also include the costs for completing the wells. For not yet drilled tight oil wells, both drilling and completion costs are included.

Rystad Energy estimates that the total demand for liquids will be around 100 million bpd in June 2020, assuming no coronavirus impact.

Read the article online at: https://www.oilfieldtechnology.com/special-reports/12032020/rystad-energy-oil-prices-could-fall-into-low-us20s/