Skip to main content
Advertisement
US production of 616 000 bpd will be shut during May and 655 000 bpd during June as a result of the supply-demand imbalance that the Covid-19 pandemic has created, according to a Rystad Energy analysis based on the early communication from US oil producers. 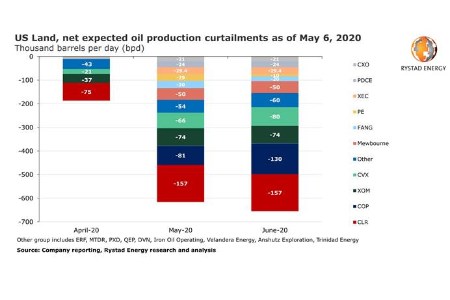 The figures do not represent the total production curtailment that the US is experiencing and will experience, but are Rystad Energy’s cumulative interpretation of the official guidance so far released from 19 producers. Actual production cuts are probably larger and are not only the result of shut-ins but also come from the natural decline from existing wells as new wells and drilling are reduced.

Rystad Energy’s calculation last week was based on guidance by only five companies. Now that more producers have communicated their plans, Rystad has updated its estimate and added new details. Based on the updated guidance, around 187 000 bpd were shut in the US during April.

Most of the producers now specifically mention shut-ins of higher-cost wells in combination with partial well-level output reductions. Economic and technical considerations, as well as leasehold obligations, are at the forefront of the decision-making process as most producers consider not only the operating cost of the well relative to the oil price but also the cost and difficulty of bringing production back to the pre-cut levels.

“Given the severity of the current market situation and significant production curtailments announced already since April, shale producers are not relying on natural decline but are rather choosing more drastic methods to reduce their output substantially and fast, which is also being confirmed in the recent communication,“ said Rystad Energy’s Vice President North American Shale and Upstream Veronika Akulinitseva.

Supermajors Chevron and ExxonMobil have been among the first producers to make clear announcements of curtailed production volumes to be expected over the next months. Chevron expects to cut US oil output by about 66 000 bpd in May and 80 000 bpd in June, which represents about 35% to 42% of its operated unconventional oil production.

About a third of ExxonMobil’s planned cuts will come from economic shut-ins in the US, primarily in the Permian. Rystad therefore estimates that around 74 000 bpd of oil may be removed in May and June, with some initial curtailments probably having been made in April.

QEP Resources announced that the company is currently curtailing 3000 bpd, or 5% of its oil output, and is ready to increase these cuts to 20% of its output if oil prices do not recover. Rystad currently estimates QEP to increase its cuts to 15% by June under the current oil price environment. Similarly, Devon Energy announced 10 000 bpd in curtailments for 1Q20, which represents about 6% of its output.

Diamondback Energy reported a 10% to 15% voluntary cut for May in areas where it does not need to incur additional operating expenses to slow down production. The company specifically mentioned it is not shutting in wells fully, but rather curtailing or limiting output from about 500 wells, with over 60% of these wells being in Delaware. Diamondback plans to evaluate the need for further cuts each month, but Rystad estimates at least 10% or 20,000 bpd may be cut further in June.

Concho Resources said it has already cut 10 500 bpd in April (or 5% of its 1Q20 oil output) and expects that the cuts might increase substantially over the next months. For now, Rystad estimates the cuts to double in May and June, representing at least 10% of Concho’s oil output, but the company has the flexibility to curtail significantly more in June.

Matador has mentioned selected shut-ins that could bring about 6000 bpd (or 13%) lower output from the otherwise expected level.

Rystad's previous numbers for Parsley Energy have been updated. Parsley said that it did not curtail production in April and planned to cut about 30 000 bpd in May, compared with the 22 000 bpd that Rystad anticipated last week. In June, production is currently expected to ramp up back to pre-cut levels, suggesting that only about 10 000 bpd will be curtailed on average for the month.

Pioneer Natural Resources has thus far not implemented significant measures to cut output. The company has only curtailed about 7000 bpd or 3% of its production from vertical wells and highlighted that it has firm transportation agreements for most of its crude and thus does not see the need to cut more for now.

Finally, regarding production curtailments among private operators: Mewbourne Oil Company, the largest private operator in Permian Delaware, intends to cut its output by 50% in May and June, which equates to approximately 50 000 bpd, as the company struggled to cover its operating costs.

Several smaller private producers including Iron Oil Operating, Anschutz Exploration, Trinidad Energy and Velandera Energy have also been mentioned among the list of companies that have had to shut in most of their production. Cumulatively, Rystad estimates these companies to contribute 17 000 bpd of cuts in the second quarter.

“The cuts will be achieved through a combination of measures including deferral of POP wells, shut-ins of higher-cost wells, and partial reduction of output from other selected wells. The Bakken and Permian volumes are so far estimated to be affected the most, as most of the companies that have reported cuts are largely present in these basins,“ concluded Akulinitseva.

Read the article online at: https://www.oilfieldtechnology.com/special-reports/08052020/rystad-energy-us-shut-ins-double/