Skip to main content
Advertisement
Advertisement
Advertisement
The combined effect of Covid-19 and an ongoing oil price war has ushered in one of the worst downturns for the energy industry in modern history. Yet, a bright side is shining through; flaring levels in the Permian Basin have fallen sharply and will continue to decline throughout the year, a Rystad Energy report shows. 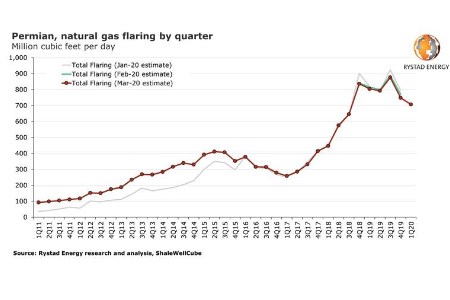 As asserted in previous estimates, wellhead flaring accounts for the major part of total flaring in the basin (more than 70%) since the beginning of last year. Delaware Texas remains the largest contributor to total Permian wellhead flaring, with close to 300 million ft3/d  as of 1Q20. Yet, as gross gas production in Delaware Texas continues to grow, driven by puregas activity in Alpine High, flaring intensity (the ratio of flared gas to total gas production) has declined substantially in the sub-basin, falling from the peak of 5.8% in 4Q17 to around 4% to 4.7% in the last six months.

On the New Mexico side of the basin, things are looking even better as the period of flaring intensity degradation seen in 2017 to 2018 is now in past. Delaware New Mexico has recently seen its flaring ratio significantly improve, declining from 4.7% in 4Q18 to 2.7% in the last six months.

Midland North’s flaring ratio is finally improving as well, and quite dramatically, after a period of several unplanned gas plant outages throughout 4Q18 and 4Q19. For 1Q20, Rystad estimates that only 3.1% of gas was flared in Midland North, which brings the basin – a basin with very well developed infrastructure – much closer to the pre-outage flaring intensity observed from 2015 to 2017.

“The-basin wide wellhead flaring ratio fell below 3.5% in the first quarter of 2020, and additional improvements are expected to materialise throughout the remainder of 2020. This is especially true now, in this period of collapsing basin-wide completion activity amid an oil price crash and prolonged price weakness,” said Rystad Energy’s Head of Shale Research Artem Abramov.

Permian activity remained relatively robust during the previous downturn (2015 to 2016), yet wellhead flaring declined by 35% between early 2015 and early 2017. This time around, even the Permian Basin is facing a rapid deceleration in fracking activity as operators try to quickly balance degradation in operational cash flow with reduced CAPEX. Therefore, Rystad expects a quick slowdown in total wellhead gas flaring throughout the remainder of this year of around 40%, from 550 million ft3/d to 330 million ft3/d.

Even without the potential shut-ins expected in 2Q20, oil production is expected to begin declining from the end of the current quarter. Flaring will decline more quickly due to its strong correlation with new well counts. Rystad estimates all flaring and flaring-driven emission intensity metrics to materially improve for Permian E&Ps in 2020.

From 4Q18 until 3Q19, Permian wellhead flaring was generating 10 kg to 12 kg of CO2 equivalent per barrel of oil production. In the last six months, flaring-driven CO2 intensity has already dropped to 8 kg to 9 kg/bbl. Rystad expects to see emission intensity in the range of 5 kg to 6 kg CO2 /bbl as soon as 4Q20.

“Such a low level of flaring has not been seen in the Permian since 2012. While the downturn introduces severe challenges for the overall economics of Permian producers, achieving outstanding emissions targets is at least one bright spot,“ added Abramov.

Read the article online at: https://www.oilfieldtechnology.com/special-reports/07042020/rystad-energy-permian-gas-flaring-declining/