Skip to main content
Advertisement
The spread of coronavirus continues to deepen the severity of the blow to global fuels demand. Rystad Energy now expects more than half of global oil demand growth to be lost in 2020. As global stocks increase by the day, the ongoing OPEC+ meeting is unlikely to result in cuts sufficient enough to balance the market, under all of our scenarios. 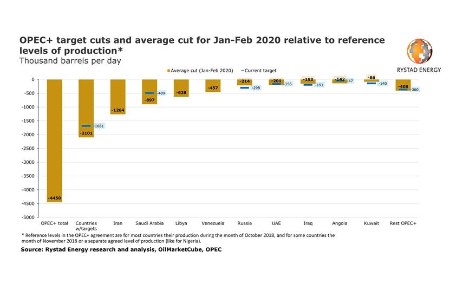 The impact on demand growth has been staggering, if not unprecedented, with February’s crude demand dropping by a shocking 4.6 million bpd, led by a 2.9 million bpd month-on-month drop in Chinese crude runs.

Rystad Energy’s pre-coronavirus global oil growth estimate was 1.1 million bpd for 2020, which was later slashed by 25% last month. Rystad's data now points to a much more pessimistic outcome, with growth likely to fall to merely 500 000 bpd, and this is assuming that the Covid-19 epidemic will largely be contained by the end of June, which in turn implies a further downside risk.

OPEC ministers are meeting in Vienna, Austria, on 5 – 6 March 2020 to decide if the oil-producing block will bite the bullet and step in by cutting production in order to balance the supply-demand gap and shield oil prices. Rystad Energy sees that as an unlikely outcome.

“We have modelled out three likely outcomes of the OPEC+ meeting, and not a single one of them comes close to bridging the supply-demand balance. Even though OPEC+ is already tremendously over-complying on cuts agreed upon in Dec-19, it’s not enough to counter the demand destruction of Covid-19,” said Bjørnar Tonhaugen, Rystad Energy’s Senior Vice President, Head of Oil Markets.

At least 2 million bpd of supply needs to be removed from second quarter balances in order to see a stabilisation in oil prices, if Libya’s shut-in 1.1 million bpd production comes back online. The supply overhang from the first quarter will also have to be worked down before a recovery in price can manifest, added Tonhaugen.

A proposal for a total 1.5 million bpd cut was agreed on by OPEC producers at the meeting on 5 March ahead of negotiations with Russia and non-OPEC-10 today (6 March). Under this proposal, OPEC would reduce output by 1 million bpd in the second quarter and the non-OPEC-10 group would be responsible for the remaining 0.5 million bpd.

At the moment, this is so far just a proposal formed only by OPEC members. It may or may not be approved on 6 March 2020 with the blessing of Russia and other OPEC+ members.

In a no-deal scenario, which is the least likely of the three, OPEC does not agree on additional cuts and extends the current production agreement through 2020. Such a development would imply a huge surplus of 1.8 million bpd for liquids in 2Q20, and 1.9 million bpd for crude, which could send Brent prices as low as US$40. In all the scenarios, Libya’s production is assumed to return to its normal 1.2 million bpd in Apr-20.

Deepening the cuts is a more likely outcome and Rystad have two scenarios for an OPEC deal.

In the scenario aligned with OPEC’s proposal, production cuts are extended by 1 million bpd in the next quarter, on top of the current agreement’s extension. Large stock builds are still inevitable, with liquids reaching 1 million bpd and crude 1.1 million bpd for the quarter. Brent would continue to see downwards pressure with the US$50 mark threatened when Libyan production returns, but the deterioration in oil prices may be halted in this scenario as long as Libyan output remains shut-in.

The suggested non-OPEC-10 cuts of 500 000 bpd are not included in the above stock build calculations because even if these countries sign off on the new quotas, Rystad believe they are unlikely to fully abide by the commitment and cut 200 000 bpd at most. In such a case, stock builds would be further reduced by the same amount.

The OPEC group has now put immense pressure on Russia for today’s meeting, which may find the burden is too large to swallow amid the risky demand backdrop, uncertainty over when Libya’s 1.1 million bpd of offline production returns, and the growing amount (7.2 million bpd in Feb-20) of offline capacity, volumes which could partially snap back onto the market in the near-term.

Rystad sees supply continuing to surge in countries that are not bound by any production quotas – namely in the US, Brazil, Norway, and Guyana.

Read the article online at: https://www.oilfieldtechnology.com/special-reports/06032020/rystad-energy-coronavirus-poised-to-wipe-out-majority-of-2020-oil-demand-growth/