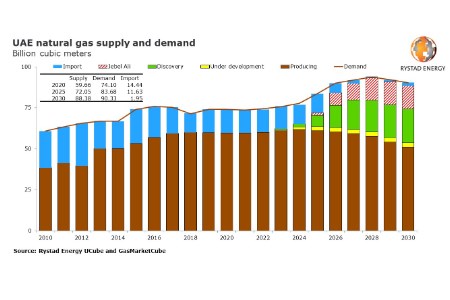 The discovery, called Jebel Ali, is operated by ADNOC and is shaping up to be one of the world’s biggest gas finds in recent years.

Rystad Energy, the independent energy research and consulting firm headquartered in Norway with offices across the globe, notes that it is too early to conclude on Jebel Ali’s total volumes considering the find covers an area of 5000 km2 and will need more appraisal wells to pinpoint the exact extent of the hydrocarbon spill point.

However, even if this new discovery turns out to have only 8 trillion ft3 of recoverable resources – one-tenth of the preliminary official estimate – that would still be enough to enable the UAE to become energy independent by 2030, potentially removing its reliance on import volumes from neighbouring countries like Qatar. Rystad Energy also see a decline in domestic gas demand after 2030 that will further limit the need for imports.

In UAE, natural gas is the primary fuel for power generation, with electricity demand projected to reach 157 terawatt-hours by the end of this year. In addition, the country uses gas for reinjection into oil fields as part of enhanced oil recovery (EOR) projects. To meet this growing demand, the UAE is moving forward with development of sour-gas fields that were discovered in the 1980s.

The announcement that ADNOC and Dubai have agreed to jointly develop the new gas find is a promising sign as this could expedite the development of the new resource and bring additional gas volumes by 2025. Another positive element is that the cost associated with bringing the shallow gas resource on stream is expected to be much lower than the more technically complicated development of Abu Dhabi’s sour gas reserves.

Read the article online at: https://www.oilfieldtechnology.com/special-reports/06022020/rystad-energy-uae-will-still-require-gas-imports-despite-jebel-ali-find/