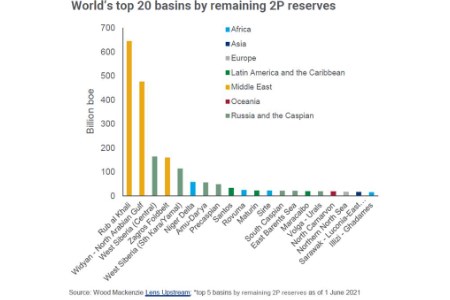 The upstream industry is navigating uncharted waters. With future oil and gas demand highly uncertain, advantaged resources with the lowest costs, lowest carbon emissions and best economics stand the greatest chance of being commercialised. Without doubt, the Middle East won the geological lottery, but how does it fare on the other fronts?

In a recent report, Wood Mackenzie used the power of Lens Subsurface Discovery to unpick petroleum systems in the region.

Fourteen countries in the Middle East account for only 3.6% of the world’s land mass, but 45% of the world’s proven and probable (2P) oil reserves and 41% of 2P gas reserves. The Middle East has produced 30% of all hydrocarbons to date and holds 53% of total remaining 2P recoverable reserves. Deposited on a passive continental shelf over hundreds of millions of years, Middle East formations are the source of 49% of the world’s net present value (NPV) in upstream oil and gas.

The Middle East has, indeed, by far the lowest and most stable lifting costs, thanks to favourable surface conditions ? onshore rigs, jack-ups and fixed platforms are cheaper to develop.

The geology is also favourable, as thicker and permeable reservoirs are more cost effective to produce.

The region also has an emissions advantage.

While it may have the highest emissions globally in absolute terms (Scopes 1 and 2) as the world’s biggest producer, it also has the lowest carbon intensity.

The region’s one disadvantage in this regard is that its fluids contain slightly higher proportions of hydrogen sulphide and carbon dioxide and, because of the sheer volumes it produces, it needs to engage in more complex and carbon-intensive processing than other regions.

The Middle East could further reduce its carbon intensity by tackling its significant processing emissions and flaring – the latter particularly in Iraq and Iran – though this is not without its challenges.

The economics of extraction, meanwhile, are skewed decidedly in favour of domestic players. The gigantic value of US$2.39 trillion remaining in the region’s upstream industry essentially benefits domestic oil companies. While international oil companies account for 14% of the production and 11.2% of the remaining capex, they only capture 8% of the resources and 6.5% of the value. Moreover, foreign investors face some of the world’s toughest fiscal terms.

Read the article online at: https://www.oilfieldtechnology.com/special-reports/05072021/wood-mackenzie-why-are-middle-east-upstream-resources-so-advantaged/