A rapid rise in subsea tree installations is projected for the global offshore industry in the coming years, as operators are poised to boost expenditure substantially on subsea equipment and installation.

After activity levels fell to only 240 subsea trees installed globally in 2017 – the lowest level since the turn of the century – Rystad Energy forecasts that over 350 subsea trees will be installed per year by 2021. 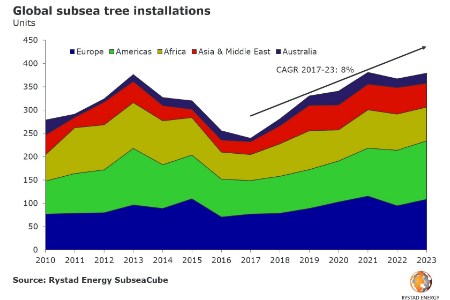 The market for subsea trees, or so-called Xmas trees, is expected to grow by 8% per year in the period 2017 to 2023. The UK and Norway will drive the growth through 2021, after which South America will take the lead.

“As the oil price has recovered since 2016, the subsea market has shown clear signs of improvement. Subsea tree installations can be seen as a main driver for this growth. We expect a substantial increase in demand in coming years,” said Rystad Energy analyst Henning Bjørvik.

Global demand for oilfield services is projected to hit US$642 billion in 2019, of which the subsea market will account for 4%. Three broad categories constitute the subsea market: Equipment; Services; and SURF (subsea umbilicals, risers and flowlines).

“We now see a new wave of subsea developments in the coming years, supported by effective cost cutting measures and cooperation between suppliers and E&Ps,” Bjørvik added.

Norway and the UK benefit from having well-established offshore infrastructure. Many marginal fields can draw advantages from their close proximity to existing facilities and can become commercially viable through subsea satellite developments.

Of the projects exploration and production companies (E&Ps) are expected to commit to over the next four years in Norway and the UK, we expect 53% of the offshore greenfield E&P expenditure to be for subsea tie-back projects. This is a significant increase from 30% in the 2010 - 2018 period.

Equinor, which is the second largest operator of subsea trees after Petrobras and has a large subsea portfolio, is expected to increase its subsea expenditure significantly during 2019, with as much as 93% of the spending being for projects on the Norwegian continental shelf. The majority of this expenditure is projected to be for subsea tie-backs.

Read the article online at: https://www.oilfieldtechnology.com/special-reports/05032019/rystad-energy-forecasts-a-boom-in-xmas-trees/