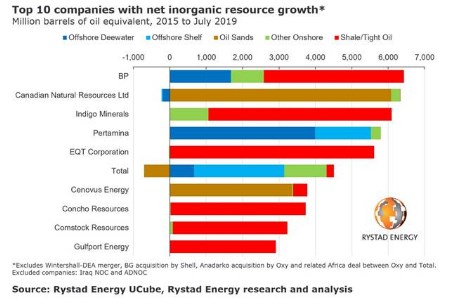 Rystad Energy has analysed the share of resources traded globally from 2015 through July 2019. Two oil and gas companies stand out in the tally, not including the outlier deal between Occidental and Anadarko in May this year: BP has seen the most resource growth from mergers and acquisitions (M&A) across all supply segments, adding nearly 6.5 billion boe.

On the sell side, Shell tops the list by a wide margin. The Anglo-Dutch company has shed almost 11 billion boe since 2015 (excluding the effect of Shell’s 2015 acquisition of BG Group).

“The majority of BP’s shale and tight oil resource growth in recent years was attained through the acquisition of BHP’s upstream assets in the US last year,” said analyst Ilka Haarmann on Rystad Energy’s Upstream team. “On the other side of the spectrum, Shell divested significant resources from all supply segments after it acquired BG in 2015.”

The global average value of announced oil and gas asset transactions is an important indicator of market activity. In the first half of 2019, the total deal value sky-rocketed thanks to Occidental’s US$57 billion acquisition of Anadarko. However, the massive Oxy-APC transaction is a clear outlier. Excluding this deal, Rystad Energy’s monthly M&A rapport shows that the monthly average in the first half of 2019 was just US$7 billion, down 37.5% from the corresponding period last year.

“M&A activity is like a finger on the pulse of the upstream industry. And in recent months we have seen relatively low-value deals – the average tally pales in comparison to recent years,” Haarmann added.

Yet these numbers do not paint a complete picture of the M&A market, as the share of offshore resources traded has risen steadily since 2015. Onshore resources, including shale and tight oil, accounted for as much as 54% of the traded resources in 2015, but has remained below 30% since 2016. Conversely, the ratio of offshore asset transactions has increased from 16% of traded resources in 2015 to more than 40% in 2018.

Read the article online at: https://www.oilfieldtechnology.com/special-reports/03102019/rystad-energy-bp-and-shell-on-opposite-ends-of-ma-ranking/