Skip to main content
Advertisement
Advertisement
Europe’s energy landscape will be completely changed once the Dutch shut down the largest gas field on the continent years ahead of schedule, according to Rystad Energy. 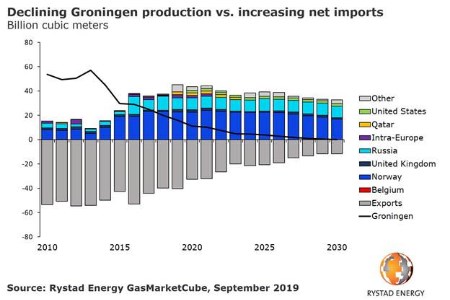 The Netherlands recently announced that production at Groningen – Europe’s largest gas field – will be halted in 2022, eight years earlier than initially planned. However, despite the ambitious target of decommissioning the field by 2022, Rystad Energy expects that there could be some residual production from Groningen up to 2030 as it is technically challenging to completely shut down production in such a short timeframe.

The drastic drop in output from Groningen will redefine the European energy landscape. The field, which had a rebound in production at the start of this century, reaching 57 billion m3 in 2013, was for decades the central cog in northwest Europe’s gas system.

“The phase-out of this giant field will force Europe to expand its gas imports at an even quicker pace. We can already see this drastic shift taking place in the Netherlands, which is in the midst of the transition from being a net gas exporter to a net importer,” says Carlos Torres-Diaz, head of gas markets research at Rystad Energy.

In Europe, more supply from alternative sources will be needed as domestic production declines and demand continues to increase. The continent has ambitious plans to decommission coal and nuclear power generation, and this could lead to higher gas demand, especially in the medium term. Renewable energy sources should replace some of the lost power capacity, but due to the low capacity factors of these technologies and their intermittency, the power system will rely strongly on gas power to provide security of supply. Consequently, Rystad Energy forecasts that gas-for-power demand in Europe will continue to increase until 2025 and then gradually decrease as renewables gain momentum.

The Netherlands has formally set an ambitious goal that 83% of total power generation is to be sourced from solar and wind by 2040. Such a transition to renewables means that the need for gas-power could reach a peak in 2020 and start a gradual decline earlier than in the rest of Europe. This will lead to a 32% drop in total gas demand in the country over the next two decades, from around 37 billion m3 in 2019 to 25 billion m3 by 2040.

“More pipeline and LNG imports will be needed in the Netherlands to replace declining production from Groningen. Dutch exports to neighboring countries are also expected to drop making the whole region more dependent on LNG imports to meet its demand,” Torres-Diaz added.

Rystad Energy expects the global market for LNG to remain oversupplied over the next two years and then tighten after 2023.

“We remain optimistic about the potential for global growth in demand driven by Asia in the long term and forecast total LNG demand to reach 604 million tpy by 2030. That means 175 million tpy of new supply is needed to meet demand by 2030,” Torres-Diaz remarked.

Turning to the global market for natural gas, Rystad Energy forecasts global supply will reach 4660 billion m3 by 2030. The additions are driven by North America, the Middle East and Russia.

“Since our last forecast in June 2019, we have increased our base supply outlook by around 50 billion m3 for 2030, driven by increased supply potential from the US and Russia” Torres-Diaz said.

Read the article online at: https://www.oilfieldtechnology.com/special-reports/02102019/rystad-energy-europes-gas-demand-set-to-grow-as-dutch-giant-folds/