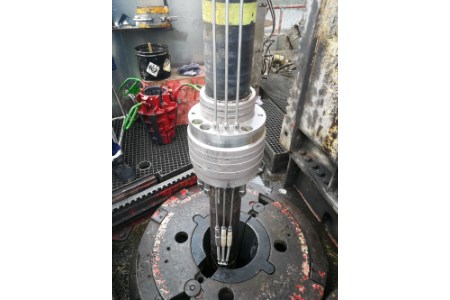 The electric submersible pump (ESP) was especially designed to fit into a tight liner and deliver some 300 m³/h of almost 90°C hot geothermal water from an installation depth of 800 m. The multi-stage centrifugal pump is driven by a nearly 1000 HP strong electric motor. The motor is sealed by a specially designed hydro-protector. During operation, the ESP’s sensor permanently transmits seven downhole parameters up to the surface, thus enabling pump protection and process optimisation. A large ElektroMotion variable frequency drive (VFD) with over 900 kVA reliably generates any volts, amps and hertz required to operate the pump within a broad production range. This is particularly important for geothermal heating projects, where heat demand typically fluctuates seasonally. The smartDRIVE VFD was also engineered and built by Oil Dynamics. It includes a large input choke, a sine wave filter, innovative controls, data interfaces and an integrated touch screen. To complete the package the matching step-up transformer and ESP power cable were also supplied by Oil Dynamics GmbH.

During the pumping tests carried out, the ORANGE ESP has proven its high performance and robustness. Both, the installation of the pumping system and the well tests were assisted by Oil Dynamics Field Service staff. For the well testing period the VFD has been delivered inside an especially modified sea container.

“We are happy to support the production of green energy and local food in the Netherlands”, says Ju¨rgen Schulz, Managing Director of Oil Dynamics GmbH.

Read the article online at: https://www.oilfieldtechnology.com/product-news/28072020/oil-dynamics-gmbh-delivers-esp-for-dutch-geothermal-project/