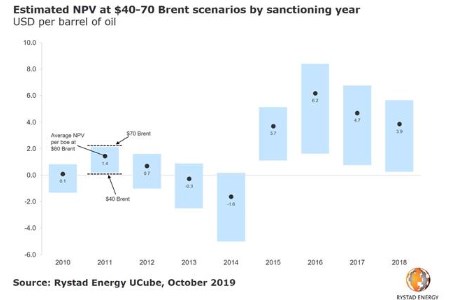 Rystad Energy has evaluated all offshore oilfields sanctioned since 2010 and ranked them by estimated value per barrel of oil (boe) under various oil price scenarios.

The sanctioning activity was record-high during the strong investment cycle from 2010 to 2014, when energy companies reached final investment decisions on offshore oilfields collectively representing close to 40 billion boe of total resources. The amount of sanctioned volumes peaked at 13.2 million boe in 2011 at the height of US$100-plus oil prices, before nose-diving to a new nadir of just 0.6 million boe sanctioned from offshore oilfields in 2016. Over the last two years, the trend of sanction volumes has ticked up.

Breaking down these numbers, Rystad Energy finds that entire vintages of offshore field development projects will fail to offer a return on investment in today’s oil price environment:

“Looking back at the offshore projects sanctioned between 2010 and 2014 with the knowledge we have today, we see that the last offshore investment cycle is struggling to create value. High development costs combined with low oil prices have severely undermined the profitability of these assets. From 2010 through 2014 around 3000 new oilfields were sanctioned, and we estimate that around 800 of them did not create value,” said Espen Erlingsen, head of upstream research at Rystad Energy. “With the pivot in development costs from 2015 onwards, the projects sanctioned over the last four years are in a much better position. This illustrates how companies that invested during the down cycle have been able to create value even in a lower oil price environment.”

“The reason why the projects sanctioned between 2010 and 2014 are struggling to create value relates primarily to the cost structure. These fields were approved when oil prices were above US$100 per barrel, and sanctioning activity was at a record high. These two elements led to an increase in costs within the E&P industry, which drove up the development cost per boe,” Erlingsen observed.

The key driver for the 2015 paradigm shift relates to cost levels for the offshore industry. The main reasons for the cost reductions are lower unit prices within the industry (like rig rates), redesign and simplification of new projects, a weaker local currency for some key offshore regions (such as the UK, Norway, and Brazil) and efficiency gains.

Rystad Energy has evaluated all offshore oilfields sanctioned since 2010. Rystad assessed historical cash flows (including revenue, costs, and taxes) and potential future cash flows, and calculated the net present value of the projects at the time of sanctioning. For historical cash flow, the actual numbers were used rather than what the operators expected at the time of approval. This means that Rystad capture any change in costs, delays in start-up or change in resources post sanctioning. Future cash flows are calculated under differing oil price scenarios of Brent at US$40, US$60 and US$70 per barrel. To benchmark the value created for various projects and approval years, the valuation as seen from the sanctioning year is divided by resources, resulting in value per boe. NPV = net present value.

Read the article online at: https://www.oilfieldtechnology.com/offshore-and-subsea/31102019/study-finds-international-ep-companies-struggling-to-profit-from-offshore-investments/