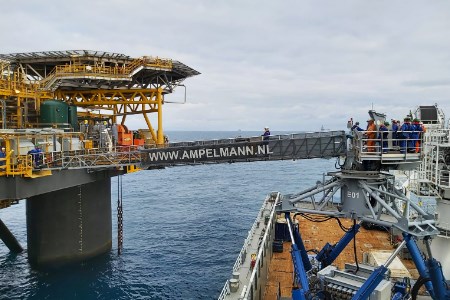 The combination of the Ampelmann E-type system and the Olympic Taurus Walk to Work (W2W) vessel is asuitable solution for continuing work under the current COVID-19 measures. As the FPF-1 has only a limited number of beds, it was necessary to look for an alternative that can increase the number of people on board (POB) while taking social distancing into account. This W2W combination offered that alternative.

Lorenz Nehring, Business Development Manager at Ampelmann’s Aberdeen office, commented: “Despite the economic and logistical challenges the industry is facing during these unprecedented times, both Olympic Shipping and Ampelmann continue to bring experience to the table. Our trusted marine access service is second to none, providing efficient and safe transfers in the North Sea and beyond.”

The E-type is also a good fit for the rough waters of the North Sea, as it is capable to transfer people in sea states up to 4.5m Hs.

“Olympic are pleased to be working with Ithaca Energy and Ampelmann on yet another W2W project, following earlier seasons’ successful campaigns,” said Torbjørn Moen, VP Commercial & Operations at Olympic Shipping.

This campaign began in mid-July and will last at least 60 days, with the possibility to extend.

Image of The Ampelmann E-type system on the Olympic Taurus W2W vessel. Courtesy of Ampelmann.

Read the article online at: https://www.oilfieldtechnology.com/offshore-and-subsea/30072020/ampelmann-and-olympic-shipping-supporting-ithaca-energy-in-the-north-sea/