Skip to main content
Advertisement
Advertisement
After hitting rock bottom in 2016, the subsea equipment market has gradually recovered, reaching over 300 awards of subsea trees in both 2018 and 2019 – three times more than in 2016, according to Rystad Energy. 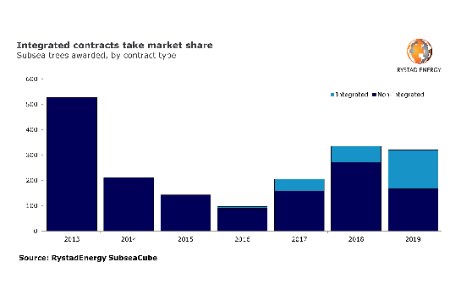 Integrated subsea contracts took centre stage in 2019 and had a breakout year with 20 such contracts signed, representing a record-high of over 150 subsea trees awarded under such deals. Integrated contracts – where service providers partner with each other to provide the full subsea scope, covering both subsea production systems (SPS) and subsea umbilicals, risers, and flowlines (SURF) – have become increasingly popular in the last four years since they were introduced.

Thus far, three main players have established themselves in this market and have secured major contracts: TechnipFMC, Subsea Integration Alliance (OneSubsea and Subsea 7), and Baker Hughes together with McDermott.

Read the article online at: https://www.oilfieldtechnology.com/offshore-and-subsea/24022020/2019-breakthrough-year-for-subsea-contracts-says-rystad-energy/