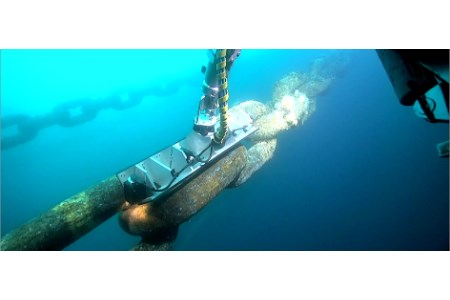 The project saw Welaptega use its new edge tracking data system and its patented CMS technology to inspect the mooring system of BP’s PSVM FPSO, which is situated in Block 31 offshore Angola. The PSVM project is the deepest deepwater project in Africa.

Welaptega is the world’s foremost innovator of in-situ mooring inspection and photogrammetry technology. By using its innovative CMS for data collection, Welaptega was able to provide accurate measurements in difficult operating conditions, which are known to create significant challenges for reliable and accurate data collection on mooring systems offshore Angola.

Unlike traditional mechanical chain measurement tools, the use of optics allows for diameter measurements to be taken from video frame grabs rather than requiring equipment to grip onto the chain. The tool gathers three measurements from a single placement. This means that deployment time is reduced, and the technology can complete an inspection 40% faster than traditional methods.

The CMS is made up of four video cameras (depth rated for 3000 m), integrated LED lighting control, and a topside digital recording system that collects high quality video of the measurement locations. The new edge tracking software then allows the data to be processed and measurement results delivered offshore.

Tyler de Gier, Welaptega’s general manager, said: “The warm waters found off the coast of Angola can lead to some of the highest corrosion rates around the globe and because of this it is vital that operators have accurate data on the integrity of their safety critical systems that are susceptible to corrosion. However, the near-constant long period swells and resulting vessel motions in this region make it a challenging area for deploying equipment and collecting measurement data.

“Our innovative optical CMS calliper allowed us to collect accurate data quickly and we were able to complete the full campaign ahead of our predicted schedule. We are very pleased to have once again worked with BP in the region and this is a relationship which we hope to continue to develop in the future.”

In November 2018, Welaptega was acquired by Ashtead Technology as part of its growth strategy.

Read the article online at: https://www.oilfieldtechnology.com/offshore-and-subsea/23092019/welaptega-completes-mooring-inspection-campaign-for-bp-offshore-angola/