Many of the upcoming deepwater oilfield developments in the Gulf of Mexico (GOM) are anticipated to produce large amounts of water during their production lifetime because of the need for water flooding for enhanced oil recovery (EOR).

In 2014, a Research Partnership to Secure Energy for America (RPSEA) project, Subsea Produced Water Sensor Development Project was approved. The project was funded by the US Department of Energy’s National Energy Technology Laboratory (NETL), through the ‘Ultra-Deepwater and Unconventional Natural Gas and Other Petroleum Resources Research and Development Programme’ authorised by the Energy Policy Act of 2005. The project is led by Clearview Subsea and assisted by NEL, as well as a group of consultants, subcontractors and vendors.

The aim of the project is to develop subsea produced water quality sensors, in particular discharge quality sensors, to the Technology Readiness Level (TRL) 3. The 24 month long project is divided into two phases. The first phase (nine months) focused on three topic areas:

Proof of concept of a new sensing technology based on Confocal Laser Fluorescence Microscopy (CLFM).

The second phase (15 months, from June 2015 to September 2016) involves in-design, construction and bench-scale testing of up to three sensors selected during the first phase.

When produced water is discharged offshore, representative samples must be periodically taken and tested for regulatory compliance monitoring. In US GOM, oil and grease content measurement and toxicity testing are conducted according to the National Pollutant Discharge Elimination System (NPDES) permit requirements. For regulatory compliance the oil and grease content is measured using the EPA Method 1664, which is a gravimetric based analysis method. What is measured by the EPA method are those components extracted into the n-hexane but which do not evaporate up to 70°C- termed as ‘oil and grease’.Subsea treatment and discharge or re-injection of produced water is emerging as an important development option for upcoming US GOM projects, in which large amounts of water are expected to be produced due to water flooding for EOR.

Separating water subsea and then either discharging or re-injecting at the seabed brings many benefits both economically and operationally. These benefits may include the use of smaller flow lines, less amount of chemicals for flow assurance issues such as hydrate formation and corrosion, easier tie-ins for the development of marginal fields. However, several key technology gaps exist for such an option to materialise. One of them is the development of an accurate, robust, and reliable produced water quality measurement sensor that can determine whether the discharge meets regulatory standards and whether the injection water quality meets design requirements.

The goal of the project is therefore to develop sensors that can be correlated well with the EPA method 1664 under conditions that they may encounter in operations subsea. Ultimately the project wants to bring the sensors to TRL 3 and also provides a roadmap for further development and commercialisation. This article provides a summary of the work done to date.

Technical requirements of the sensors

Technical requirements of subsea produced water discharge sensors were developed with input from major oil companies, subsea systems suppliers, engineering and construction companies and other industry experts. These were gathered and discussed at a workshop held in Houston, Texas on 16 December 2014.

The key technical requirements developed in that workshop are summarised in the table below. Further information is available from the Subsea Produced Water Discharge Sensor Technical Requirements Final Report, RPSEA Document No. 12121.6301.03.01, June 2015.

It is anticipated that any sensors developed will not only be used for regulatory compliance monitoring and reporting, but also to provide information for operations and process control.

Using a remotely operated vehicle (ROV) to take samples subsea and bring them to the surface for analysis will be too slow for operations and process control purpose, in addition to being prohibitively expensive.

In order to help select existing sensors that have the best potential for being developed to subsea applications, a technology gap analysis excercise was carried out (Technical Gap Analysis Final Report (Phase 1 Final Report), RPSEA Document No. 12121.6301.03.Final1). As part of the exercise, a separate workshop was held in Houston, Texas on 23 February 2015, with the aim of gathering industry input on the technology gaps, and also on how the gap analysis should be conducted.

The main technology gaps identified for subsea produced water discharge sensors were considered to be relating to measurement accuracy and reliability. At the heart of these technology gaps is the issue of fouling and fouling mitigation, which is closely linked to maintenance, calibration and therefore accuracy and reliability. Others gaps identified were linked to the provision of accurate reference oil and grease measurement method, testing, and dedicated testing facilities, and the availability and use of the relevant international and industry- wide standards or best practice guidance.

Existing topside sensors do not always have the required accuracy for oil and grease concentration in the range of interest for discharge. For example, in the Gulf of Mexico, 29 mg/L is the monthly average and 42 mg/L the maximum daily average per the general permits.

To date, no online or inline sensors have been permitted for regulatory compliance monitoring in the GOM, with few others having been elsewhere in the world. With existing topside sensors faced with reliability challenges, it is anticipated that the challenges faced for subsea applications will be even more severe. Many of the sensors with potential for subsea applications are optically based. Robust automatic cleaning systems for the optical windows will therefore be a major part of the sensor technology development.

Overall, the gap analysis excercise confirms that there is little or no gap in existing sensors in coping with oil concentration, oil density, salinity ranges and response time. A substantial gap exists in meeting MTBF (mean time between failures), marinisation and system integration. A similar gap also exists in meeting pressure requirements, although this is to a lesser degree compared to meeting MTBF and marinisation. However, marinisation of the sensors is considered to be mainly an engineering exercise and therefore not expected to be a major obstacle in the development of the technology.

Technology gaps related to meeting the temperature, flow velocity range and the ability to deal with the presence of production chemicals are also thought to be relatively small.

The technologies that were gap analysed include:

Following the gap analysis, three existing sensors were selected for prototype construction and bench-scale testing. These include:Light scattering from Digital.

The high-resolution 3D images enable accurate measurement of oil volume over a wide range of changes in upstream process conditions or produced water characteristics. These may occur in a subsea separation and produced water treatment system, such as oil droplet size changes, solids (including oil-coated solids), gas bubbles and background fluorescence due to chemical injection or reservoir water compositions.

After proof of concept on CLFM (Subsea Produced Water Discharge Sensor Design Report, Document No. 12121.6301.03.Final2.1) was conducted in Phase 1 using desktop studies and imaging tests with field produced water, the concept was included for prototype construction and testing in Phase 2.

Following the selection of sensors for Phase 2 of the RPSEA Project, detailed designs were carried out by the individual sensor manufacturers. There were two designs: one for subsea applications and one for the bench scale testing.

To make sure that the designs met the technical requirements established earlier in the project, a design review meeting was set up for each of the four vendors. The review meeting provided an opportunity for the vendors to present how the sensors would meet the technical requirements specified, and at the same time allowed the Working Project Group, (which consisted of industry experts from operators, system suppliers, engineering companies, and also the project team) to ask questions on the detailed designs.

A prototype for each of the four sensors was subsequently constructed by the four vendors for the bench scale testing.

The bench scale testing is aimed at assessing the performance of the sensors using simulated produced water in a lab environment (Subsea Produced Water Discharge Sensor Bench-scale Test Requirements, Document No. 12121.6301.03.02). Synthetic produced water is generated using filtered sea water mixed with oil and other contaminants that are often found in a typical produced water stream. To minimise the installation effect and to make sure that the test fluid is consistent going through each of the test instruments, the sensors are installed on a vertical test spool with spacing that is agreed by the individual vendors.

Test parameters for the bench scale testing include:

Substantial progress has been made in developing subsea produced water discharge sensors for GOM applications through the RPSEA project. Prototype sensors for bench scale testing have been constructed by four vendors and are now ready for being tested using simulated produced water in a laboratory environment under a range of test conditions that are found in a typical GOM produced water. Upon the completion of the bench scale testing, performance assessments will be carried out and a roadmap for further development and commercialisation will be established. 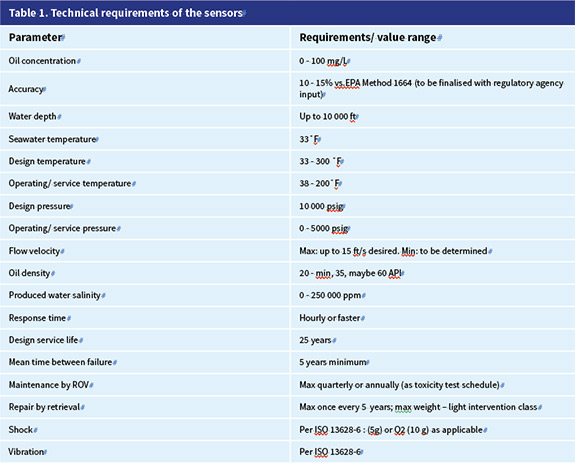 Adapted from a press release by Louise Mulhall

Read the article online at: https://www.oilfieldtechnology.com/offshore-and-subsea/23092016/advances-in-subsea-treatment-technology/