Limiting the potential impact of oil and gas activities on the environment and creating effective regulation should be based on a robust body of scientific evidence and research. This is especially true when it comes to understanding the impact of exploration and production (E&P) sound on marine life, a present topic of concern. The E&P Sound & Marine Life (SML) JIP was established to support scientific research to increase technical knowledge of the actual effects of the industry sound on marine life.

The SML JIP, under the auspices of the International Association of Oil and Gas Producers (IOGP), is a partnership of 12 oil and gas companies and the International Association of Geophysical Contractors (IAGC). It is currently the largest non-governmental funder of research on this topic, having committed to date US$55 million. In its 11 year history, research funded by the SML JIP has resulted in the publication of more than 30 reports and over 70 peer reviewed papers by independent scientists.

Although financially supported by E&P companies, the research is carried out by independent researchers who receive contracts through a competitive proposal process based on the methods used by the US National Science Foundation through an anonymous external review process. SML JIP policies require that all research is to be shared in public reports and published in peer-reviewed scientific journals to ensure maximum transparency and value to the wider research and regulatory communities.

To advance understanding of the interaction between sound from oil and gas operations and marine life, the SML JIP identifies and commissions research to:


This article outlines four different areas of research the SML JIP has funded. These include the hearing abilities of sea turtles, the effect of seismic pulses on the hearing ability of dolphins, an improved tag to help measure the behavioural response of wild animals to passing seismic vessels, and the measured horizontal output of single seismic sources and clusters in terms of the frequencies and sound levels they produce.

Historically, little was known about sea turtles’ auditory systems, including how hearing characteristics vary with life stages. A deeper understanding of turtle hearing abilities is needed to determine whether special mitigation measures may be needed to reduce risk of impacts to turtles at different life stages. Research is helping to define hearing frequency ranges and thresholds of two life stages of turtles.

The SML JIP sponsored research to assess hearing in post-hatchling and juvenile loggerhead turtles (Caretta caretta). In this study, two independent but complementary approaches were used to assess hearing, specifically behavioural and electrophysiological audiography response to various frequencies of underwater sound. Behavioural trials involved first training turtles to respond to a single frequency and then recording their behaviour when they were presented with sounds with frequencies between 50 Hz and 1200 Hz from an underwater speaker. Electrophysiological studies involved recording auditory evoked potential (AEPs) of submerged turtles when sound stimuli were presented using an underwater speaker.

This was the first detailed assessment of turtle hearing across life stages and it will become an important component of future assessment efforts. The study has also shown that AEP tests are less sensitive than behavioural tests and should not be used to set the standard for sound exposure levels in the field.

Through JIP research, it is becoming apparent that the potential for seismic air sources to cause hearing loss in dolphins is lower than previously predicted. The JIP funded a study to investigate the potential impact of multiple seismic air pulses on hearing in bottlenose dolphins (Tursiops truncatus). In some offshore operations, dolphins are likely to be exposed to sound from seismic air source arrays more often than any other group of marine mammals, making data on the effects of multiple seismic air pulses on dolphin hearing an important knowledge gap. Prior to this research, studies with dolphins and porpoises had been limited to single impulses but none of these resulted in temporary threshold shift (TTS) at the highest achievable exposure levels. Previous research on multiple exposures used tonal sounds similar to sonar signals, which have different characteristics from broadband seismic sounds. The JIP sought to fill the knowledge gap by funding studies which measured effects from exposure to multiple impulses from a seismic air source – the output of which has rapid rise times and high peak pressures.

The study measured the hearing thresholds of bottlenose dolphins using behavioural and auditory evoked potential (AEP) measurements. Dolphins were exposed to ten seismic pulses from a single source spaced ten seconds apart (as is typical during offshore operations) at received levels between 193 to 195 dB re 1µPa2. These pulses were generated by a variable volume seismic sound source.

The tests showed that no TTS was observed in any of the behavioural tests. In the AEP tests only a small increase in evoked potential hearing thresholds were produced in one of the three dolphin test subjects.

It is widely recognised that tagging devices, also called ‘tags’, are able to provide information about the behaviour, habitat use, migration patterns, and reactions of marine mammals to sound. JIP research has contributed to improving tag technology that will help shape the next generation of tags.Therefore the JIP supported a study to improve tag technology so they can stay deployed for longer, measure diving behaviour in more detail, and provide more accurate data on location.

As a first step, the JIP held an animal tagging technology development workshop. Forty-five instrument manufacturers and the researchers that use these instruments came together to assess current technology and identify where improvements were required. Recommendations targeted increasing volume of data collected, improved attachment duration and methods, data communication, recovery or retrieval, and development of new sensors that relate behaviour and physiology to important life functions.

Next, the JIP funded a new tag prototype that was deployed during studies on sperm whales. The prototype was needed because the tags used to measure sperm whale responses to seismic source arrays during a field study in the Gulf of Mexico in 2005 were limited in ability to record spatial and depth data. The new tag had a depth-time recorder and 3D accelerator to measure diving in three dimensions. All these data resulted in a 3D image of the sperm whale’s movements (Figure 1) which improved understanding of sperm whale behaviour.

Good dive data with accurate locations are essential for measuring the potential effect of seismic source sound operations on sperm whale movements. This level of detail and data will help to improve scientific understanding.

The JIP is improving the accuracy of seismic source modelling, as well as predictions of the sound characteristics likely to be encountered by marine life. This project was designed to acquire calibration data that will enable an improvement in the accuracy of seismic source modelling codes at higher frequencies (above 500 Hz). Since the frequencies most useful to imaging geological structures are below 1000 Hz, higher frequency calibration data had not been systematically collected previously. Such data is also being used to determine whether seismic air sources produce frequencies up to 50 kHz that may affect hearing in marine mammals.

Measurements were done from a floating barge in a fjord in Norway in which seismic air source was surrounded by 19 hydrophones in the near-, mid-, and far-fields. An accelerometer was used to measure particle motion in the near field. Seventy three combinations of airgun type and volume were measured, including G, Bolt, sleeve and GI sources, as well as a number of multi-airgun clusters typically used in source arrays. Each combination was measured at a range of water depths and operating pressures to obtain the most comprehensive airgun output measurements ever made for this frequency range. 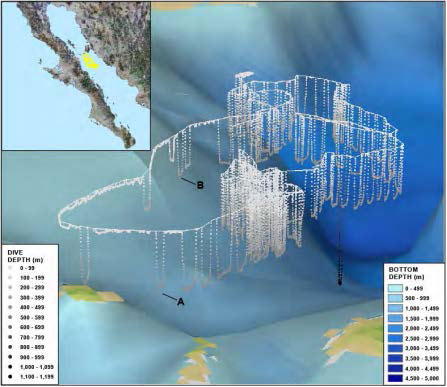 
Edited from an article written by Gail Adams Jackson

Read the article online at: https://www.oilfieldtechnology.com/offshore-and-subsea/23062016/researching-sound-and-marine-life/