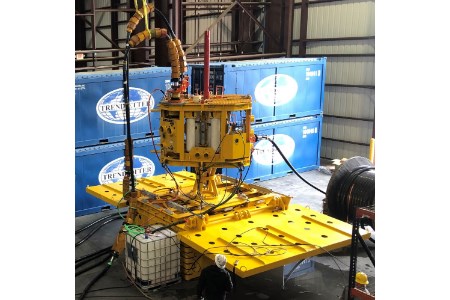 A major operator approached Trendsetter to deliver an intervention solution suitable for use in the abandonment of an ‘unconventional’ subsea well. The well, located offshore South America, was in approximately 7300fsw and required hydraulic intervention to both kill the well and to place a lower cement plug near the reservoir. For this project, Trendsetter was able to engineer and manufacture several bespoke interface components as well as to deploy the STIM system on an integrated mud mat.

Due to non-standard customer circumstances, the 15K STIM Manifold was modified for a deployment on an ROV-operated mud mat (as opposed to on the tree), while connecting the system to the well via a high- pressure flexible line. No VXT adapters were available from the tree OEM within the required timeframe, necessitating Trendsetter to design, fabricate and deploy a custom high-pressure interface adapter that allowed for pumping operations into the wellbore.

Read the article online at: https://www.oilfieldtechnology.com/offshore-and-subsea/20082019/trendsetter-completes-hydraulic-intervention-project/