Skip to main content
Advertisement
Advertisement
Shearwater GeoServices Holding AS has announced the award by Apache of a 4D seismic survey with 3D extension over the Forties field in the UK North Sea. 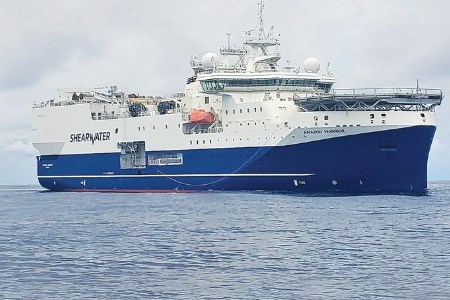 “We are very pleased to see a Shearwater Qmarine 4D crew returning to the Forties field for the fourth time,” said Irene Waage Basili, CEO of Shearwater GeoServices. “The project adds to the North Sea 4D programme we announced earlier this year and we continue to demonstrate industry leading technology and experience in 4D seismic.”

The one-and-a-half-month project will be conducted by the Amazon Warrior (pictured), starting in 2Q20. In January, Shearwater announced multiple 4D surveys to be performed in the 2020 North Sea season.

Read the article online at: https://www.oilfieldtechnology.com/offshore-and-subsea/18052020/shearwater-to-carry-out-north-sea-4d-survey-for-apache/