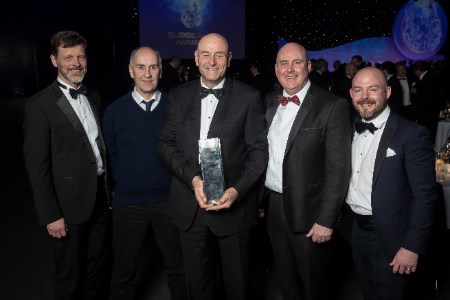 The accolades are awarded during the organisation’s Subsea Expo event, Europe’s largest subsea focused exhibition and conference. This year, the ceremony took place at the P&J Live venue in Aberdeen, UK, with over 600 people in attendance hosted by Olympic silver medallist, Kriss Akabusi.

The Subsea UK Awards judging panel recognised the Aberdeen headquartered business for its successful development of technologies which provide ‘smart standardisation’, allowing operators to reduce development schedule and costs by using standard subsea hardware while still enabling project specific technology. The firm’s Flow Access Module (FAM) essentially acts as an enhanced production ‘USB port’ within the jumper envelope. It means that throughout the life of field, customers have a flexible way of integrating functions such as flow measurement, flow assurance, data acquisition and hydraulic intervention.

Since the first FAM was installed subsea in the Gulf of Mexico in 2016 over Seventy have been adopted globally. In the last year, the company has continued to secure business in key deepwater regions, including the Gulf of Mexico and West Africa.

The company was also acknowledged for expanding their Flow Intervention Services (FIS) offering, launching their ‘next generation’ 15 000 psi Hydraulic Intervention System. The new higher rated system is an evolution of their earlier 10 000 psi FIS which has completed 19 subsea intervention operations to date, including scale squeeze and acid stimulation, for multiple clients and from a range of vessels in West Africa.

Ian Donald, Enpro Subsea’s CEO, said: “Our long-term approach has been to develop differentiated technologies which return tangible cost savings and operational flexibility to customers. This Subsea UK Company of the Year Award recognises the team’s continued commitment in delivering this. As an SME to be considered in this category alongside the key global organisations and ultimately win this award is a great recognition of our technologies and the team’s efforts.”

Enpro Subsea has grown from a team of three in 2011 to currently employing 50 people across the three offices in the UK, US and Ghana.

Read the article online at: https://www.oilfieldtechnology.com/offshore-and-subsea/13022020/enpro-subsea-named-company-of-the-year-by-subsea-uk/