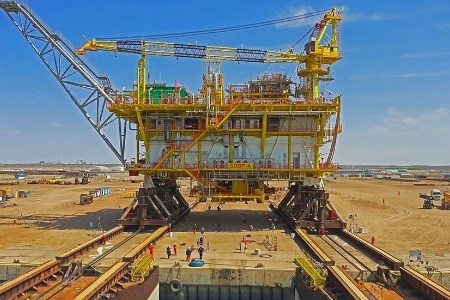 Mammoet had previously supported the engineering and construction company - ILK Insaat, with the load-out of the jacket for the Garagol Deniz Drilling Platform A (GDDP-A). Mammoet was then asked to return to the same site near Turkmenbashi to complete the load-out of the platform’s topside as well.

The topside had been in situ for some time, so there were concerns about the high level of friction that could possibly occur during breakout. Mammoet designed a solution using high capacity hydraulic breakout jacks in combination with strand jacks that minimised the risks and ensured the maneuvers could be performed as smoothly as possible. Although the friction was still high, the method used meant Mammoet was able to precisely realign the structure throughout the operation.

First, the topside was jacked-up and weighed using load cells, coming in at nearly 4000 t.

The load-out operation was split into three phases: the initial breakout of the platform, the movement via skid tracks onshore, and the actual load-out from land to barge.

Mammoet worked with the client to grease the skid tracks, before pushing the topside from its initial position using breakout jacks. Strand jacks were then used to skid the topside along the skid tracks and it was loaded-out onto the barge, ready to be installed offshore in the Garagol Deniz West field.

Communication between all teams proved especially important while the topside was loaded-out onto the barge. A load-out supervisor was in direct contact with the ballast control room, enabling the most accurate ballasting possible, resulting in safer and most efficient operation.

Read the latest issue of Oilfield Technology in full for free: Issue 3 2021

Oilfield Technology’s third issue of 2021 starts with a report from Wood Mackenzie focusing on the upstream industry’s fortunes in Asia-Pacific. The rest of the issue is dedicated to features covering offshore engineering, coiled tubing, frac technology, completion technologies, water management, well placement and much more.

Read the article online at: https://www.oilfieldtechnology.com/offshore-and-subsea/06102021/mammoet-completes-load-out-of-platforms-topside-in-turkmenistan/