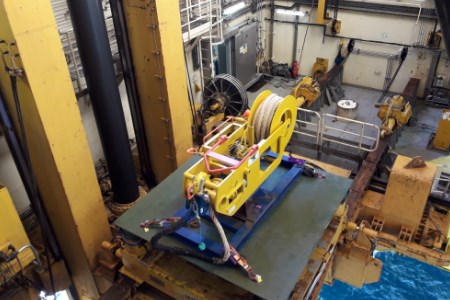 “TVO understands the challenges associated with wellhead fatigue and is constantly innovating to develop better solutions,” says TVO CEO Jim Maher. “This lighter and less expensive tethered BOP enables reliable operations on new exploration wells and simplifies re-entry and P&A on older wells. The recent successful deployment of our next-generation technology illustrates the value TVO delivers through our commitment to continuing to improve our industry-leading technology.”

The Tethered BOP system arrests the motion of the BOP stack above the wellhead, substantially reducing wellhead cyclic stresses and enhancing fatigue life. Depending on the specific riser and wellhead configuration, fatigue life has been improved by as much as 1,000 times the original unmitigated wellhead fatigue. An added benefit is the increased limits to the rig watch circle, particularly in shallow water, where watch circles can be very restrictive.

The TVO system will be combined with a wireless monitoring system based on Sonardyne’s highly configurable, low-power Subsea Monitoring, Analysis and Reporting Technology (SMART). The complete system will be used to alleviate wellhead fatigue during a planned drilling program carried out by the COSL Prospector semisubmersible in the coming months on the Tui oil field, in the Taranaki Basin, offshore New Zealand. Sonardyne SMART ensures operations are within fatigue safety limits by monitoring movement of the BOP and the bottom of the drilling riser and providing in situ data processing capabilities to extract summary packets of information, such as minimum, maximum and standard deviations for accelerations and rotations in all axes.

According to Vice President of Trendsetter Vulcan Offshore Kevin Chell, the new design addresses the need to access wells in cases where the wellhead was not designed to handle the loads and strain induced by modern, larger and heavier BOPs. “Using our tethering and monitoring system, operators are able to use their subsea infrastructure with confidence for longer, which means they can economically access more resources and extend the life of their fields,” he says.

Read the article online at: https://www.oilfieldtechnology.com/offshore-and-subsea/02082019/trendsetter-vulcan-offshore-deploys-wellhead-fatigue-mitigation-system-offshore-new-zealand/