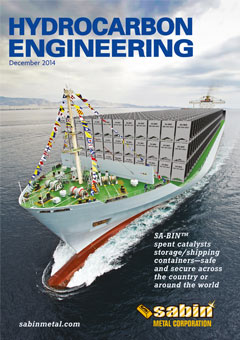 I am writing this just after attending the 19th ERTC and out of all that was said in the presentations and discussions I attended there is one phrase that sticks in my mind, ‘after the rain comes the sun.’ Paulo Carmona, ENMC National Authority for Fuel Market President, said this, not only in relation to the weather in Lisbon (which wasn’t great) but Europe’s refining sector. We all know that Europe’s refining industry isn't having the best time at the moment, but, according to Carmona and others at the event, there is light at the end of the tunnel.

First of all, let’s look at the bad news. The refining industry in Europe used to be considered one of the most profitable businesses to be in, and in many countries such as the US it still is. Unfortunately this is also the case for many emerging markets, which are providing Europe’s refineries with a lot of stiff competition. More bad news is that a lot of oil companies are now examining their refining portfolio, in Europe in particular, and redefining their business which in many instances is leading to the sales and conversions of refineries, as well as facilities being mothballed and shutdown. Also, the changes in the market, not only in Europe, but around the world, are likely to be in place for some time to come, and in many instances, they are not all that beneficial to Europe.

But, I’m going to move on quickly and look at what positives there still are in the industry, which will hopefully lead us through the rain and towards the sun. Refined products are expected to remain key in the European energy mix for some time to come, so of course, refineries will still be needed domestically as Europe can’t rely 100% on imports. Secondly, those that adapt survive, and as the crude slate changes and European consumer demand shifts towards distillates, refineries throughout the continent are listening and making changes. And there are a few more reasons that Europe can feel confident about its refining sector, which were passionately pointed out by Galp Energia’s CEO Manuel De Oliveria also at the ERTC. He said that Europe is home to some of the most talented, skilled and competent engineers in the refining sector, so obviously, despite the current troubles, there is the knowledge within the industry to keep it afloat and active. Also, De Oliveria pointed out that refining is one of the most complex industries in Europe. It not only provides much needed products but it also supports other industries, provides direct and indirect jobs and supports the economy as a whole through taxes, so it is not a sector that can be easily abandoned and ignored, it is not a business system that can be closed down and neglected lightly. So it seems that despite the current problems, Europe’s refining sector may yet pull through and with people such as De Oliveria and Carmona in its corner to fight, we definitely can’t give up yet.

As this is the final issue of the year I’d like to take this opportunity, on behalf of the entire Hydrocarbon Engineering team, to wish you a joyful festive period and a happy and healthy new year. We will be back in 2015, with what we hope will be an exciting year for all of us at the magazine and for you the reader.