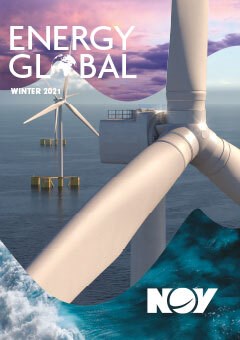 To summarise 2021 in a few words would be doing the year a disservice. For the entire world, the year has been nothing short of a rollercoaster, a time to rip your calendar up because 99% of the time, plans will have been cancelled or rearranged (thank you pandemic). Over 20 months deep into this drama called COVID-19, I think we are fully aware now that this is life for the foreseeable future, but enough with the doom and gloom, this month is the season of goodwill, fiery festivities, an abundance of smiles, and a deluge of delicacies.

This positivity for the upcoming festive period is matched in the renewables sector, which hopes to continue its growth trajectory into the new year, having already been glowing with success for the entire 12 months passed. The daily news from the industry has been of innovative technologies developed, project contracts signed, finances finalised, and strong partnerships formed, to name a smattering of successes. According to Deloitte, the renewable energy industry has remained nothing less than resilient during the year, with renewables becoming increasingly competitive with other available energies as a result of falling costs of renewable energy resources, more durable energy storage, and improvements in technology.

The future of renewables is poised to accelerate, largely driven by support from government policies, stricter emissions rules, more ambitious clean energy goals, and support for environmental, sustainability, and governance considerations. The COP26 Climate Change Conference, held this year in Glasgow, Scotland, provided world leaders the opportunity to collaborate, pool ideas, and present creative ways to actively reduce carbon emissions, and the world will see actions taken over the coming years regarding the decisions and declarations formalised at this event.

If we look at the figures – because numbers do not lie – the incredibly promising future for the renewable energy industry is clear as day. The International Energy Agency (IEA) has reported that global renewable electricity capacity is projected to rise by more than 60% by 2026, up from 2020 levels. Specifically, over the coming years, it will be renewable energies that account for approximately 95% of all increases in global power capacity – with solar photovoltaics singularly contributing 50% of this.

Whilst China disappointingly refused to join the global pledge at COP26 to phase out its use of coal, instead willing to phase down use of the product, the country actually remains the global leader in the volume of its renewable capacity additions. The IEA has forecast China to reach 1200 GW of wind and solar capacity in 2026, far ahead of its 2030 target. Interestingly, India, another country that also only pledged to phase down its use of coal, will be the global leader in terms of the renewable energy growth rate, with new installations of production doubling when compared with the past five years.

In the more imminent year of 2022, it is the next-generation clean energy technologies that we should keep an eye on. Forget the other colours of the spectrum, it is green hydrogen that is displaying its potential, mainly due to the decreasing costs of renewable energy, which is a vital input in the production of green hydrogen. This issue of Energy Global magazine features several articles on green hydrogen and its place in the global energy mix, so read on to learn more.

As an interesting 12 months comes to an end, the Energy Global team thanks all our readers for their support and positivity, and we look forward to continuing to provide you with current and informative market news and developments as we move into 2022. We wish you all a healthy and prosperous holiday season.