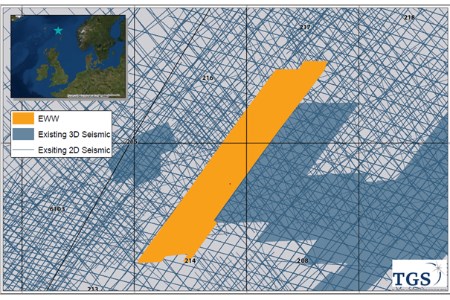 This data, which offers an enhanced subsurface image of the region to assist in the geological understand of this highly prolific region, is now available and being delivered to first customers.

Erlend Wild West is a 3900 km2 survey consisting of 1900 km2 of data acquired during a project which began in the autumn of 2018, using Clari-Fi broadband technology to deliver high fidelity imaging of the subsurface, along with a number of vintage surveys, including EW12 3D.

The combination of processing of new and reprocessing of vintage data for this survey area has realised a significant upshift (uplift) in imaging the visualisation of the sub–basalt-influenced geological settings, including high velocity contrasts and volcanics. This will allow greater understanding of the plays in one of the most exciting E&P sectors regions of the UK continental shelf.

Kristian Johansen, CEO at TGS, said: “I am pleased that we now have available to E&P customers this Erlend Wild West survey in the West of Shetlands region, which covers an area that already has existing discoveries and where a number of high potential prospects have also been identified. Already, feedback from first customers has been particularly positive and reinforces the extensive work we have recently undertaken to build up our world-class processing and imaging capabilities.”

Read the article online at: https://www.oilfieldtechnology.com/exploration/24032020/tgs-completes-processing-of-erlend-wild-west-seismic-project/