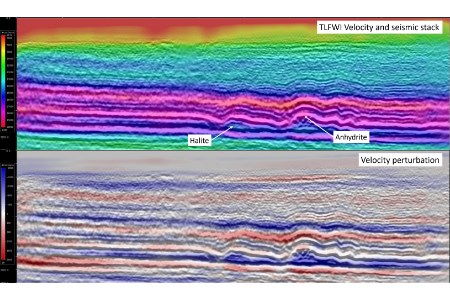 However, persistent fluctuations in oil prices are challenging operators to reduce drilling & completion costs. State-of-the-art seismic is one tool that can help operators to de-risk well planning and meet production targets. These days, the Paleozoic play in the Delaware Basin is getting the most attention, but it is a very challenging area to image seismically due to the presence of a near-surface evaporite formation. This Cenozoic fill was later partially dissolved by groundwater leaving a highly heterogeneous accumulation, which scatters seismic energy and obscures the reservoir intervals. CGG Multi-Client & New Ventures have been applying the latest seismic technology in the Delaware Basin to overcome this challenge and “lift the veil” on reservoirs in this region.

A very accurate near-surface model is key to ensuring a good starting point for depth model building and accurate imaging of the deeper layers. Full-waveform inversion (FWI) is a powerful tool to achieve this objective, but has traditionally been very difficult to apply on land data due to inherent near-surface complexity and non-acoustic wave propagation. Nonetheless, previous trials in the area (Roy et al., 2017) showed that iterative refraction FWI used in conjunction with thorough pre-processing and anisotropic PSDM can help better resolve late Permian salt structures, even when using legacy data with limited bandwidth.

CGG took this a step further by designing the Gini 3D survey which would provide a better data set for FWI with higher-density sampling and a broadband “low dwell” vibroseis sweep, ensuring good data quality down to 3Hz. Survey design also included full-azimuth distribution and offsets long enough to record refracted energy down to the non-weathered zone (up to 23,000 ft in this case). This project benefitted from the latest advances in salt FWI borrowed from offshore applications. CGG has pioneered the application of FWI technology and its proprietary time-lag FWI (TLFWI, Zhang et al, 2018) was able to provide higher-quality velocity models in these challenging conditions than conventional FWI. Salt is made primarily of halite and anhydrite in this part of the basin and this high-resolution TLFWI (22Hz) was able to clearly differentiate between the two, both in structure and elastic properties.

It is widely accepted that image quality for onshore seismic is strongly driven by trace density (e.g. Saleh et al, 2017). Drastically decreasing shot and receiver line spacing comes at a cost, but this can be partly offset by using more efficient acquisition practices, which increase the productivity of the crew. A high-density autonomous, blended vibroseis test was performed in the same area to explore the imaging benefits and economics of such type of surveys in the Delaware Basin (Leslie et al., 2019). Five times the trace density was achieved compared to the equivalent conventional slip-sweep baseline survey without a significant increase in cost. Based on the preliminary processing results of the test, this opens the door to a new generation of onshore seismic, which will provide even better reservoir imaging in the tough conditions of the Permian Basin.

Read the article online at: https://www.oilfieldtechnology.com/exploration/20092019/cgg-seismic-technology-providing-new-perspective-on-northwest-texas-plays/