The play opening billion-barrel Jubilee oil discovery in Ghana in 2007 triggered a decade of exploration drilling chasing analogues in the deep water Central Atlantic margins, from Mauritania to Cameroon in West Africa margin and from Guyana to NE Brazil in South America 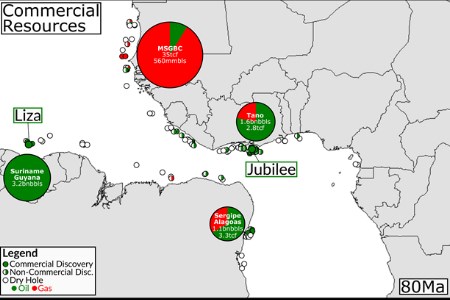 Many were enticed into the play but the rewards have been concentrated in only a few companies. So what lessons have been learned? First and foremost, if you want to repeat a success, then you need to first understand the geological factors that are needed for the success you are trying to replicate. A new report from Westwood identifies the key success factors.

78 companies have spent US$11.4 billion drilling 128 exploration wells in 13 basins along the Atlantic margins in the hunt for the next Jubilee from 2007 to early 2018.

61 wells have been drilled at the frontier stage of exploration, prior to the first commercial discovery being made in a basin. Frontier exploration delivered four commercial basin opening discoveries at a commercial success rate (CSR) of 7% and technical success rate (TSR) of 39%. A total 6.5 billion bbls of oil and 41 trillion ft3 of gas have been discovered in the Tano, MSGBC, Sergipe-Alagoas and Suriname-Guyana basins. Nine of the companies that participated in the frontier discoveries captured 74% of the total volume. The companies that drilled the most frontier exploration wells didn’t get the most reward, however.

The keys to unlocking commercial success in the Cretaceous plays of the Central Atlantic margins lie in participating early in the opening of a new province, being selective, learning quickly the key geological elements needed for success and the integration of geological and geophysical analysis.

Lessons have been hard-won for many, but there is plenty of running room for the industry. Westwood estimates that 80% of exploration wells have so far targeted the slope areas of the margins. A key lesson is that a large part of the commercial resources in the slope setting are located in areas dominated by normal faulting with gentle slopes, where higher quality deep water reservoir sands can be deposited and optimal conditions for hydrocarbon migration are created. Success rates are lower on steeper, narrow slopes where deep water sands are more confined and traps are smaller.

Significant resources remain to be discovered on the margin slopes and industry attention is also focusing on frontier plays on the ultra-deep water basin floor settings that have a proven high potential but have been tested by only a few wells to date.

This is an extract from a new research report published in Westwood’s online Wildcat service entitled: ‘Jubilee to Liza, The Keys to Unlocking Commercial Success’

You can access the original version of this article by clicking here.

Read the article online at: https://www.oilfieldtechnology.com/exploration/20032018/westwood-insight-jubilee-to-liza-lessons-from-a-decade-of-exploration-in-the-central-atlantic/