The world’s oil and gas explorers powered ahead and discovered 12.2 billion boe in 2019, the highest volume since 2015, according to estimates from Rystad Energy. Last year recorded 26 discoveries of more than 100 million boe, with offshore regions dominating the list of new oil and gas deposits. 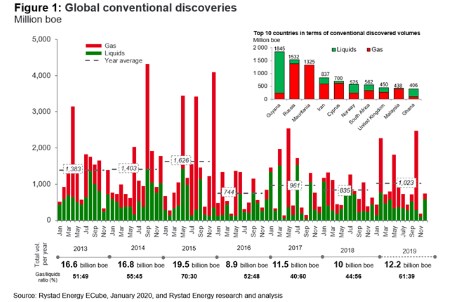 Guyana’s success story from 2018 continued in 2019, with ExxonMobil adding four new discoveries within its offshore Stabroek block, while Tullow Oil’s Jethro and Joe exploration wells established the presence of a working petroleum system to the west of the Stabroek block. Rystad Energy estimates that the discoveries in Guyana hold cumulative recoverable resources of around 1.8 billion boe.

“ExxonMobil can be declared explorer of the year for a second year in a row thanks to its ongoing efforts and results in Guyana, along with significant investments in Cyprus. The supermajor was exceptional, both in terms of discovered volumes and value creation from exploration,” says Palzor Shenga, a senior analyst on Rystad Energy’s upstream team.

The US company discovered around 1.07 billion boe in additional net resources last year. Rystad Energy estimates the value creation from these volumes to be around US$2.7 billion, largely driven by the continued success in Guyana.

Off the coast of Mauritania, BP’s Orca gas field was not only the largest single discovery, but also the deepest-water find of 2019, estimated by Rystad Energy to hold about 1.3 billion boe of recoverable resources. Recent gas discoveries in the region now support plans to build an additional LNG hub in the Bir Allah area in Mauritania.

In Russia, Gazprom announced two discoveries in the Kara Sea, Dinkov in the Rusanovsky block and Nyarmeyskoye in the Nyarmeysky block. Rystad Energy estimates Gazprom’s 2019 discoveries to hold combined recoverable resources of around 1.5 billion boe, with Dinkov ranked as the second-largest find in 2019 world-wide.

Other key offshore discoveries in 2019 include Total’s Brulpadda in South Africa, ExxonMobil’s Glaucus in Cyprus, CNOOC’s Glengorm in the United Kingdom and Equinor’s Sputnik in the Norwegian sector of the Barents Sea.

Even so, many of 2019’s high-impact wells turned out to be duds, Shenga noted. “Although the discovered volumes for 2019 surpassed the preceding year, it was a disappointing year for high-profile wells as many prospects with significant estimated pre-drill resources failed to deliver. Over 10 billion barrels of estimated pre-drill volumes were at stake in wells that failed to encounter hydrocarbons.”

US independent Hess and Chinese state player CNOOC occupy the second and the third spots on the list of top explorers of 2019 in terms of value creation from new discoveries, with both benefiting from their partnership with ExxonMobil in Guyana’s Stabroek block. Hess added about US$2 billion in value from new discoveries last year, while CNOOC had value creation of about US$1.8 billion.

In 2020, Rystad Energy expects the global discovered volumes to continue the rising trend of recent years, with the list of upcoming wildcats including several high-impact wells along with some promising probes delayed from 2019.

Read the article online at: https://www.oilfieldtechnology.com/exploration/13012020/rystad-energy-states-that-global-oil-and-gas-discoveries-reached-a-four-year-high-in-2019-boosted-by-exxonmobils-guyana-success/