Skip to main content
Advertisement
Advertisement
As the world is aching to put an end to a devastating 2020, oil producers are now assessing the lasting effect of the pandemic into 2021 – and in particular, the consequences of oil demand destruction to global balances. The existing OPEC+ group deal saved the market from collapsing earlier this year, but then Covid-19 came back with a second-wave vengeance. If output increases as planned from January, the world will have to face a new 200 million bbl surplus through May, Rystad Energy calculates. 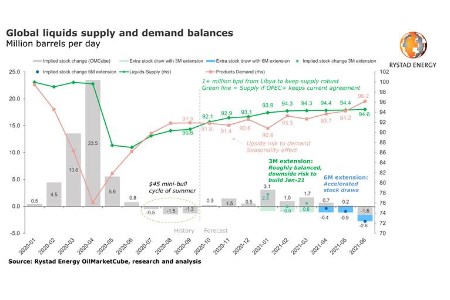 The OPEC+ group will be debating whether or not to maintain its currently curtailed oil production levels to 2021 or to increase them as planned by nearly 2 million bpd. The existing plan was drafted during the pandemic’s first wave and under a more optimistic forecast for end-year oil demand, which turned out to be too high as the pandemic’s second wave brought new lockdowns globally.

Rystad Energy’s balances show that should OPEC+ fails to amend its existing deal and increases its production, the world in January will face its biggest monthly glut since April 2020 with an average daily surplus of 3.1 million bbl for the month. Smaller surpluses are bound to continue through May, building a total glut that will exceed 200 million bbl for the first five months of 2021, before finally starting to shrink from June.

Modelling a possible decision by OPEC+ to postpone its production increase, Rystad Energy has also calculated the effect on global oil balances of three-month and six-month extension scenarios.

If OPEC+ postpones its planned January production increase by three months, we will still see consecutive monthly surpluses through May, but the total size will be limited to about 115 million barrels. Should, however, OPEC+ take the brave call to extend the current status quo for six months, then surpluses will end after March, leaving behind a smaller, three-month glut of just 90 million bbl, which will be erased by the end of June due to deficits coming from April.

“We believe keeping the current agreement in place – which calls for raising target production by 1.9 million bpd from January 2021 – could send Brent back down to US$40 per barrel or lower. A three-month extension would only provide marginal support to prices, but would help to establish US$50 as a sturdier floor, while a six-month extension could help to meaningfully deplete the storage overhang and supercharge prices into the mid-US$50s,“ says Bjornar Tonhaugen, Head of Oil Markets at Rystad Energy.

In a way, OPEC+ is already locked into extending its current cuts for some period in 2021 and probably knows it will be punished by the market if it doesn’t do so, Tonhaugen adds.

The oil demand recovery trajectory is the primary consideration of OPEC+ as it debates whether to modify its supply regime. Rystad expects the second wave of Covid-19 cases to continue to surge through the end of 2020 and have a residual effect on oil demand in 2021, causing a slow recovery. At present, Rystad expects demand for total liquids will not surpass 93 million bpd before year-end 2020.

Should the OPEC+ cut extension go through, the primary benefactor will of course be the most flexible marginal supply source on the market – shale. The past few months demonstrated that US$40 Brent was enough to slow oil production growth prospects in the US shale patch, but at the same time it was clearly not a high enough price environment to allow players to thrive, as evidenced by the increase in consolidation and bankruptcy activity.

“The breakup of the OPEC+ deal in March 2020, when participants failed to agree on an additional 1.5 million bpd of cuts, sparked a full collapse in oil prices with a drop of US$10 per barrel from the time the decision was made public until markets opened the following Monday. These were of course special circumstances, but a vote of no confidence from OPEC+ this week would surely be crushing for oil prices, though perhaps to a milder degree this time,“ Tonhaugen concludes.

Note: There is an upside to the above forecasts, especially for 2Q21, as for the purposes of the above calculations, Rystad Energy has not yet included any material positive effect by vaccines on oil demand in the first half of 2021. The reason is that the roll-out of vaccination campaigns still remains uncertain due to required regulatory approvals. Rystad Energy also expects that the first in line to be vaccinated will be healthcare professionals and the elderly groups of the global population. Rystad's assumption is for a slow and gradual roll-out that will take time before it results in lockdown liftings and behavioural change in the wider population.

Read the article online at: https://www.oilfieldtechnology.com/drilling-and-production/30112020/rystad-energy-if-opec-increases-output-in-january-200-million-bbl-glut-will-build-through-may/