Torchlight Energy Resources Inc. has announced that the Flying B Ranch #1 has been drilled to a total depth of 6470 ft. The well has been logged and 25 sidewall cores were taken from the different pay zones. The well has been cased and cemented in preparation for a near-term fracing and completion.

"We are encouraged with the initial scientific data from the logs as it correlates very well with the offset Davis Bros. Harris Est. #1 well from a pay, porosity, and resistivity perspective," stated Rich Masterson, Torchlight's Consulting Geologist. "In addition, we have some preliminary data from the CMR and Lithoscanner log analysis and as expected, the results are showing that the rock qualities in this Flying B Ranch #1 well are very similar to the wells drilled in the Wolfberry formation (a name coined to indicate the Permian Basin Shale play including comingled production from the Wolfcamp, Dean and Spraberry formations). We encountered over 400 feet of pay zone and have identified at least two horizontal targets. The Wolfcamp A&B, the Dean, the Leonard, and the Spraberry formations are all present and showing as potential completion targets. The zones have low clay content and high organic content."

"Next steps are to evaluate all of the scientific data gathered and determine which intervals to frac and the best frac design to stimulate optimal production results," stated Will McAndrew III, COO of Torchlight. "We are excited to begin this phase of our Hazel Project development. Once we have established oil production, we will plan additional vertical wells for control purposes and a horizontal development plan."

Read the article online at: https://www.oilfieldtechnology.com/drilling-and-production/26072016/torchlight-reaches-total-depth-on-flying-b-ranch-well-1-2831/ 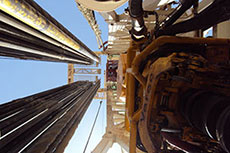 Torchlight Energy Resources Inc. has announced that drilling has commenced on the next well in the Orogrande Project, the University Founders B-19 #1.