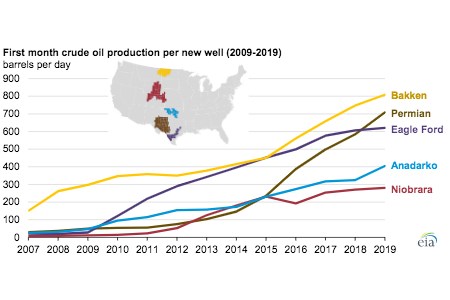 The average new well in each DPR region produced more oil in 2019 than wells drilled in previous years in those same regions. This trend has persisted for more than 10 consecutive years. More effective drilling techniques, including the increasing prevalence of hydraulic fracturing and horizontal drilling, have helped to increase these initial production rates. In particular, well productivity was improved because of the injection of more proppant during the hydraulic fracturing process and the ability to drill longer horizontal components (also known as laterals) and perforate more stages.

Rig counts have fluctuated throughout 2019 in all DPR regions. The aggregate rig counts declined 16% in the first 11 months of 2019. Despite the decrease in rig count, producers are capable of drilling more efficient wells faster to keep US crude oil production growing.

Read the article online at: https://www.oilfieldtechnology.com/drilling-and-production/24012020/us-crude-oil-production-efficiency-continues-to-improve/