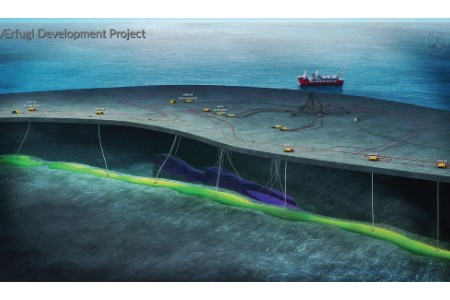 Development of the Ærfugl gas and condensate field is planned in two phases. The phase two development has been pushed forward because one of the wells can be drilled from an available well slot on one of Skarv’s subsea templates.

All production on Ærfugl will be tied into Skarv, which is located 210 km west of Sandnessjøen in Nordland county. Aker BP and the other licensees (PGNiG, Equinor and Wintershall Dea) are planning to complete phase one of Ærfugl, which consists of three wells, as well as to complete development of the remaining two wells in phase two.

Test production from Ærfugl started in 2013. The results from this have provided valuable information that has helped optimise the development.

The Plan for Development and Operation (PDO) estimates the Ærfugl gas reserves at about 35 billion m3. According to Aker BP, the PDO’s estimated investment cost for the overall development is about NOK 8 billion.

Ærfugl was proven in 2000. The PDO for the development was approved in April 2018. Export of gas from Skarv will be postponed so as to ensure capacity for the Ærfugl gas on the Skarv FPSO. This will contribute to increased oil recovery on Skarv.

Read the article online at: https://www.oilfieldtechnology.com/drilling-and-production/23042020/production-begins-at-rfugl-field/