Essar has announced that its Raniganj (East) Block in West Bengal has become India’s first coal bed methane (CBM) asset to cross the 1 million m3/d production milestone. This makes Essar the country’s largest unconventional gas player. The targeted plateau production from the Block is 3 million m3/d. As per 2016 Netherland Sewell & Associates, Inc. (NSAI) report, the proven, probable and possible gross CBM reserves in the Raniganj (East) Block is estimated at 1.09 trillion ft3. The Block is assessed to have additional resources in the ‘contingent’ category of around 270 billion ft3.

“We married talent with technology to transform reserves to production. In the last 12 months, the average well productivity has more than doubled, the gas break out time in new wells has reduced to days instead of months, and the work over cycle has reduced to a fifth. Our collaborative relationship with international service providers has resulted in win-win solutions,” said Manish Maheshwari, CEO-E&P, Essar.

Essar has commenced supply to Matix Fertilisers for its pre-commissioning activities at the rate of 150 000 m3/d. Besides Matix, the CBM gas is being supplied to industrial consumers in the catchment area of Durgapur. The gas pricing is in compliance with the government notified formula of October 2014.

“There are tremendous opportunities in the domestic unconventional hydrocarbon sector. The Hydrocarbon Exploration Licensing Policy (HELP), which was announced by the Government in March 2016, recognises this potential in contributing towards national energy security,”

Maheshwari added. A study, which was undertaken with the support of US Trade & Development Agency, by an independent US firm that has expertise in shale has made a preliminary assessment of original in-place shale gas resources of around 8 trillion ft3 underneath the CBM play in the Raniganj (East) Block.

Read the article online at: https://www.oilfieldtechnology.com/drilling-and-production/22062016/essar-raniganj-block-achieves-cbm-production-milestone-3560/

The Saudi Arabian Oil Company has signed a Memorandum of Understanding (MoU) with China Petroleum & Chemical Corporation (Sinopec) covering multiple areas of potential collaboration between the parties in Saudi Arabia. 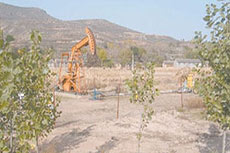 Coalbed methane (CBM) may become as important for Asia and Australia as shale gas has become for North America, but this will require the CBM industry to overcome critical commercial, technical and regulatory challenges.