Skip to main content
Advertisement
Advertisement
Advertisement
The energy metals sector is bracing for a major backlash, as the Covid-19 pandemic and low oil prices are taking a heavy toll on global demand for OCTG (oil country tubular goods). Rystad Energy expects demand to decline from around 14.7 million t last year to 12.6 million t in 2020, a decline of nearly 15%, with the vital US market forecast to see the sharpest drop. 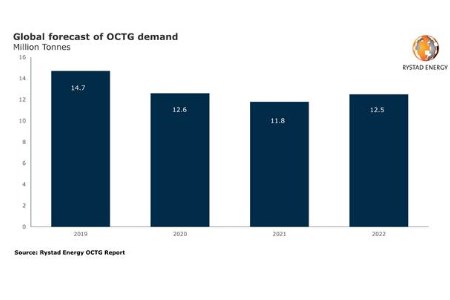 The US represents the world’s largest OCTG market, having accounted for about 35% of all demand in 2019, but this year the country is seeing an immediate and severe drop in OCTG tonnage requirements, as operators have slashed their drilling programmes by in some cases up to 50%.

The US shale industry is particularly exposed to falling oil prices, with drilling rigs typically on short-term contracts and with WTI crude facing unique pressures relating to storage capacity, takeaway constraints and the timing of futures trading contracts. Low oil and gas prices have pushed US operators to reduce their full year capital guidance by an average of about 40% compared to what they guided initially in February 2020.

The running rate of activity – measured in the number of rigs and frac spreads in operation – is now expected to decline by as much as 80% from the peak levels seen just five weeks ago, with close to 6000 horizontal wells expected to be cut this year from the original drilling plans and estimates laid out at the beginning of the year. OCTG demand in the US will suffer as a consequence, with Rystad Energy anticipating a decline of 40% y/y.

“We currently forecast that global OCTG demand will bottom out in 2021 at around 11.8 million t, before edging up again in 2022. While the US market is expected to see improved demand in 2021, the gains seen there are likely to be outweighed by the projected further declines in the Rest-of-World markets, as the impact of Covid-19 and longer investment cycles limit new well completion activity in the first half of 2021,” said Rystad Energy Senior Vice President, Energy Metals, James Ley.

China, the world’s second largest OCTG market with a share of just over 20% in 2019, has seen state oil giant CNPC issue a major tender in recent weeks for OCTG requirements in 2020. As a result, Rystad expects Chinese demand for OCTG in 2020 will actually remain approximately in line with the levels seen last year, at about 3.8 million t.

China, meanwhile, is the largest OCTG exporter to global markets, especially in the API grades. Rystad Energy expects Chinese OCTG export prices to experience some downward pressure this year given the bear market conditions, but the stable domestic demand for OCTG should prevent the kind of pricing pain experienced during the previous downturn in 2015.

The forecast for OCTG consumption in Russia and the Middle East in 2020 is harder to estimate following the Easter announcement that OPEC+ countries had agreed on production cuts.

Under this deal, Russia signalled its intent to cut oil production this year by up to 2 million bpd, or around 18%. Rystad's forecast for the decline in OCTG requirements in Russia itself is so far expected to be less severe, at around 5%. This is because Russia is ramping up the use of enhanced oil recovery (EOR) in its older mature fields, a technique that requires more OCTG per field.

In the Middle East, meanwhile, Rystad estimates that total OCTG consumption will fall in 2020 by around 14% y/y.

“Above and beyond the volume declines that are poised to hit the global OCTG market, prices are expected to come under pressure. Some operators are likely to re-open the pricing agreed under previous tenders in a bid to push costs down, potentially seeking rebates of up to 30%. We believe that global prices will be under pressure for OCTG casing through the rest of the year,” Ley concluded.

Read the article online at: https://www.oilfieldtechnology.com/drilling-and-production/22042020/rystad-energy-global-octg-demand-to-decline-by-15-in-2020/