Skip to main content
Advertisement
Advertisement
Advertisement
The Covid-19 epidemic and the ongoing oil price war have ravaged global energy markets during the last two months, and offshore drilling in particular is among the most affected industry segments. A Rystad Energy impact analysis estimates that drillers will see up to 10% of their contract volumes canceled in 2020 and 2021, representing a combined loss of revenue of about US$3 billion. 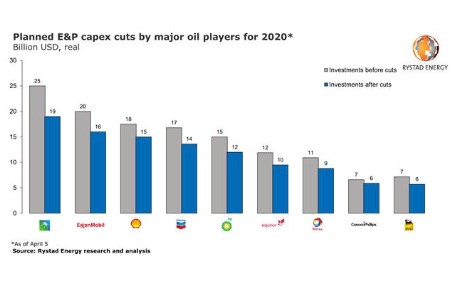 The estimated contract value in 2020–2021 is US$30 billion in total; US$20 billion in 2020 and US$10 billion in 2021. So far six rig years of contracts have been cancelled, translating to approximately US$400 million in contract value. These numbers will only increase as operators continue to slash CAPEX budgets and delay projects, Rystad analysis shows.

“More than US$22 billion in contract value was wiped off the books as a result of contracts being canceled between 2014 and 2017. Now, in the infancy of a new downturn, a market that was only beginning to return to a healthy level of contracting activity, contract volumes and dayrates has seen its hopes crushed,“ said Rystad Energy’s Head of Offshore Rig Market Services Oddmund Føre.

If anything was learned from the previous crisis, it was that such struggles can be brutal and can last a long time. Alas, there are plenty of reasons to expect that the battle that lies ahead for drillers will be considerably tougher than the one fought to get through the previous downcycle. Even top drillers will be at risk of failing to meet debt payments and may need restructuring.

Of the 100 listed energy service companies analysed by Rystad Energy across the various service segments for this research, more than two-thirds are unlikely to be able to meet their interest payment obligations on time this year. Many offshore drillers will be living on the edge in the coming months.

Rystad's analysis clearly shows that offshore drillers and offshore vessel providers will generally be unable to pay their total outstanding debt of 2020 based on their cash flow from operating activities (CFO), unless they are able to make sufficient CAPEX cuts. Otherwise, they will have to turn to capital markets for refinancing.

The credit default swap spread, a measure of the cost of issuing debt, skyrocketed early this year for some offshore drillers, which as a result now face significantly higher costs for refinancing debt.

One of the trends seen five years ago was that E&Ps canceled many contracts and chose not to declare many contract extension options, and thereafter re-hired rigs at lower rates. This, however, is not likely to be a factor in the current downturn. Rig rates had started to move upwards from OPEX levels in the months leading up to the coronavirus outbreak, but not enough to constitute any significant cost savings for E&Ps if they were to cancel and re-hire a rig.

Especially in 2021 there will hardly be any contracts left for the E&Ps to cancel. This means that the rig industry is already dependent on new contracting activity to maintain survivable levels of utilisation – and new contracts will be really difficult to secure in the current environment.

“Any chances of returning to previous activity and price levels have been torpedoed by the twin effects of the pandemic and the OPEC+ dispute. We expect dayrates to be pushed down to OPEX levels once again as the industry now tries to continue to cut costs and improve its performance in a challenging environment,” added Føre.

Read the article online at: https://www.oilfieldtechnology.com/drilling-and-production/09042020/rystad-energy-offshore-drillers-face-contract-cancellations-worth-up-to-us3-billion/