Technavio analysts forecast the oil country tubular goods (OCTG) market in Indonesia to grow at a CAGR of over 4% during the forecast period, according to their latest market research report. 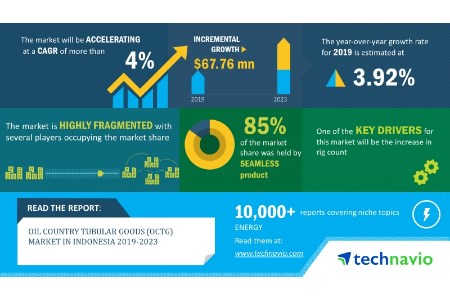 The declining raw material prices is one of the major trends being witnessed in the oil country tubular goods market (OCTG) in Indonesia 2019 - 2023. Ensuring price competitiveness is critical for the commercial success of any product. In the case of OCTG products such as pipes and connectors, one of the key costs incurred pertains to the cost of raw materials, which is mainly steel. The global trends in steel prices have a significant impact on the market. The current trend of low steel prices is expected to significantly boost the demand for OCTG.

According to Technavio analysts, one of the key factors contributing to the growth of the oil country tubular goods market in Indonesia is the rise in offshore E&P activities:

The oil and gas E&P activities in the country were slow, and no new blocks were awarded in the bid rounds in 2016, owing to the plunging crude oil prices and domestic oil and gas regulatory environment in Indonesia. However, since the third quarter of 2016, with the recovery in crude oil prices, there has been a revival of the upstream oil and gas sector in Indonesia, as well as other countries in the world. For example, in February 2018, Directorate General of Oil and Gas (MIGAS) prepared 24 acreages conventional and two acreages non-conventional oil and gas for bidding in 2018. Also, there has been a significant increase in demand for oil in the country, owing to economic development.

According to a senior analyst at Technavio for research on oil and gas, “In 2017, Oil and gas accounted for over 50% of the total primary energy consumption in Indonesia. Hence, this has resulted in the widening of the gap between the oil supply and demand in the country, thus highlighting the importance of increasing the domestic supply. For instance, as compared with 2016, the crude oil import for Indonesia increased by 6.26% in 2017. According to lEA, Indonesia has switched from being a net oil exporter to importer. In 2016, Indonesia was the third-largest net importer of oil products and the tenth-largest in terms of electricity, globally.”

The oil country tubular goods market in Indonesia research report provides market segmentation by the application (onshore and offshore) and by product (seamless and welded). It provides an in-depth analysis of the prominent factors influencing the market, including drivers, opportunities, trends, and industry-specific challenges.

The onshore segment held the largest market share in 2018, accounting for nearly 80% of the market. This application segment is expected to dominate the global market throughout the forecast period.

The seamless segment held the largest market share in 2018, accounting for over 85% of the market. This product segment is expected to dominate the global market throughout the forecast period.

For more information, you can request a free sample report here.

Read the article online at: https://www.oilfieldtechnology.com/drilling-and-production/07012019/technavio-octg-market-in-indonesia-2019--2023/

US shale oil producers are in line to suffer more than US$10 billion in derivative hedging losses this year if oil prices remain around US$100 per barrel, Rystad Energy research shows.