US oil production keeps accelerating towards new highs. New records are expected both when the final numbers for May emerge and at the end of the year. 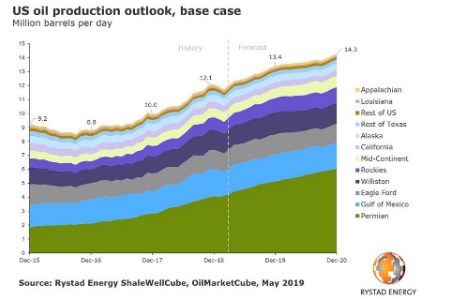 Rystad Energy is raising its forecast for US crude output to 13.4 million bpd by December 2019. For May 2019, research and calculations point to crude oil production averaging 12.5 million bpd. Both are new all-time highs.

“Our US supply projections have been revised up yet again. US oil production is already higher than many in the market believe,” says Bjørnar Tonhaugen, Head of Oil Market Research at Rystad Energy.

“Strong growth persists in the Permian Basin on both the New Mexico and the Texas sides. Updated production estimates suggest that the Permian Basin surpassed 4.5 million bpd in May. Considering the ongoing recovery in fracking activity, Rystad Energy maintains its previous expectation that Texas production will exceed 5 million bpd at some point during the second quarter of 2019,” Tonhaugen added.

The energy consultancy sees production in the Gulf of Mexico reaching 1.95 million bpd by the end of 2019, up by 135 000 bpd since its last update, partly thanks to the early start-up of Shell’s Appomattox field.

Rystad Energy expects crude oil prices to stay flat in the near term.

“The oil market is again in a tug-of-war situation with downwards pressure currently dominating. Downside pressures exist from weak demand and fear of economic growth degradation, partially induced from protectionist policies in the US and partially from structural forces, as exemplified by Chinese PMIs showing a dip again in May,” Tonhaugen remarked.

“We continue to expect OPEC production to increase through the remainder of 2019, but risks to short-term supply are undoubtedly still plentiful, with a total of 1.3 million bpd at risk from Iran, Venezuela, Libya and Nigeria,” Tonhaugen said.

Read the article online at: https://www.oilfieldtechnology.com/drilling-and-production/06062019/rystad-energy-us-oil-output-poised-to-set-yet-another-record-in-2019/