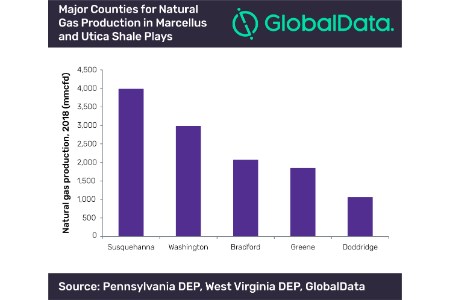 Andrew Folse, Oil & Gas Analyst at GlobalData, comments: “Fracking activity in Marcellus and Utica formations is driven by large demand for natural gas from the nearby populated areas. As in the case of other unconventional shale plays, operators in Marcellus and Utica shales continue to drill longer laterals beyond 12 000 ft and some as long as three miles.”

The Appalachian has seen a clear trend for larger scale developments by key operators by increasing the surface of contiguous acreage and allowing for more production by well recovery.

Folse continues: “Marcellus and Utica plays continue to receive premium for their natural gas compared to the benchmark of Henry Hub. Over the past three years, this region has received an average US$0.40 premium over Henry Hub. At the same time, operators have become more efficient in optimising costs reaching a lower break-even price. With the demand continuing to grow in the region and consistent premiums over Henry Hub, the Appalachian Basin will continue to drive natural gas production in the US.”

Read the article online at: https://www.oilfieldtechnology.com/drilling-and-production/04072019/globaldata-susquehanna-county-drives-natural-gas-production-in-marcellus-shale-in-us/