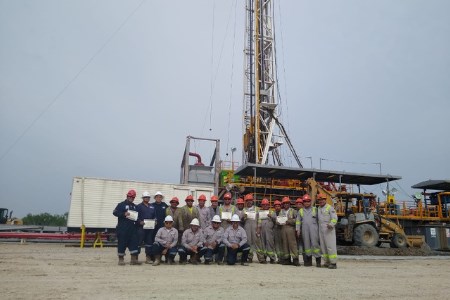 Simmons Edeco supplied drilling and completion services for Newpek on a recently acquired concession in the Trevino oilfield, in the Burgos Basin in the state of Tamaulipas in northeastern Mexico. Two vertical wells were drilled to depths in the 2900-m range. Newpek aims to access the rich Oligocene marine oil and gas reserves, which are present in the two blocks.

“This is the first time we will have worked on behalf of Newpek, so it was particularly meaningful. We’re very excited about having the opportunity to drill the first wells for them on this concession,” said Niels Versfeld, CEO of Simmons Edeco. “It demonstrates the confidence that they – and the industry in Mexico - have in our ability to provide reliable, efficient and cost-effective services. We look forward to working with them to help ensure that they achieve maximum results with future drilling programs.”

Simmons Edeco worked in the scrubby, flat terrain of this mature oilfield, using its mobile Rig 738 to drill the wells. With its ability to move in 48 loads, while managing a hookload sufficient to drill wells in the 3500-m range, it is extremely well suited for drilling in Burgos Basin.

The onshore drilling specialist supported the operation from its base in Reynosa, Tamaulipas, Mexico. Looking ahead, Newpek may commission Simmons Edeco to drill a further seven wells.

Read the article online at: https://www.oilfieldtechnology.com/drilling-and-production/03062020/simmons-edeco-completes-mexico-drilling-campaign-for-newpek/